Korth GmbH is arguably one of the finest small arms manufactures in the world. Don’t kick yourself if you’re unfamiliar with the company; their custom to-order firearms are exceedingly rare and run several thousand dollars a piece.

And up until recently, the company only manufactured three handguns, the Classic Revolver, the Combat Revolver and the Classic Pistol. Now Korth is adding a fourth model, the PRS Pistol.

At a glance it looks like a modernized 1911 with a full-length railed dust cover with an unusually-shaped slide. The external changes reflect a fundamental departure from the Browning design. Gone is the tilting barrel that is common to the vast majority of handgun designs — this gun is roller-delayed blowback-operated. 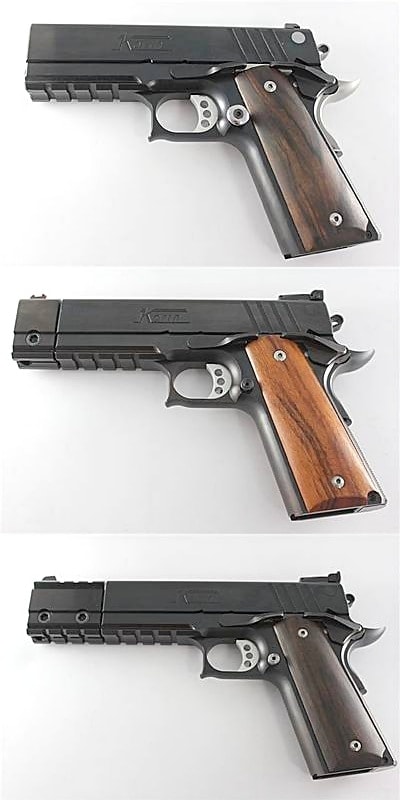 Suffice it to say Browning would be somewhat unfamiliar with the design. It’s got his trigger, his safeties and not much else in common.

While roller-delayed blowback guns are mostly rifles and submachine guns, there is one notable handgun that uses the same operation, the CZ-52. Roller-locked guns are typically thought to have sharper recoil than other guns of the same size, weight and chambering, as they generally cycle very fast.

The PRS does have one thing in common with the original 1911: it’s a single-stack .45 ACP. The Korth PRS is a bullseye gun. Like all Korth guns, it can be ordered in any number of configurations and barrel lengths.

Korth is offering the PRS with a four-, five- or six-inch barrel standard. The frame is sized for the four-inch barrel and the longer barrels come with smooth or railed barrel weights to further reduce muzzle flip and tame recoil in addition to giving the shooter a spot to mount optics, such as red dot sights.

The extended barrels are also offered as ported barrels to work with a hybrid barrel weight compensator as well as with a square-shaped sound suppressor that matches the muzzle’s profile. As the barrel assembly is modular, it may be possible to swap it around and change the gun’s configuration.

The barrel weights will be offered in steel or aluminum. Depending on the length of barrel and weight material, the Korth PRS can weigh from 35 to 44 ounces.

As each one of these is made to order, they will be available with a wide selection of sights, finishes and controls. Every PRS Pistol can be a little different.

Korth does not list what the PRS will sell for on their website. Prices are available on request. But it is safe to say that it will run in the $5,000 to $10,000 range; at the upper limit Korth pistols cost about $15,000.

But if you’re looking for the best of the best when it comes to precision-made custom guns, there are few options as fine as Korth. For more details and specifications, visit the Korth PRS product page.