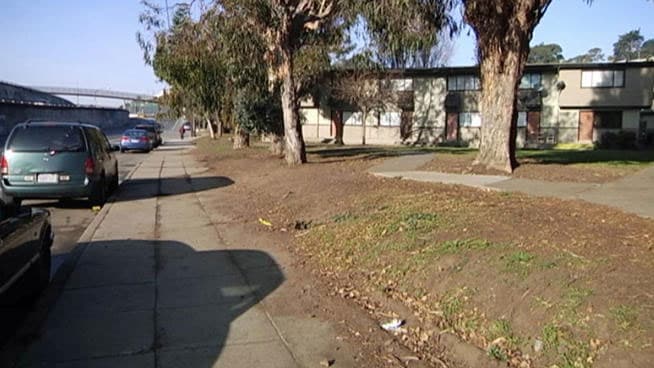 Outside the Alemany public housing complex where officers found the fatally shot suspect and his victim earlier this month. (Photo credit: NBC)

Police in San Francisco arrested a 16-year-old boy Thursday in connection with a robbery which occurred earlier this month and ended in the death of the teen’s accomplice when a bullet ricocheted from the victim’s face and fatally struck the accomplice.

According to a local NBC affiliate, the teen victim told police that he was outside of the Alemany public housing complex in Bernal Heights when he was approached and surrounded by a group of teen boys.

The suspects demanded the teen hand over his cell phone and began to rummage through his possessions looking for other valuables.

Meanwhile, the 16-year-old suspect pulled out a handgun. The victim cooperated with all of the suspects’ demands, did not resist and did all that they asked of him, but for reasons which are unknown, the armed suspect shot him anyway. However, as the teen fired the gun, the bullet ricocheted from the victim’s face and struck another one of the suspects.

The crowd of suspects quickly dispersed, leaving their injured accomplice behind.

It’s unknown who called the police, but when officers arrived they found both the suspect and the victim. Although the location and extent of his of injuries were not revealed, the suspect, who was later identified as 16-year-old Clifton Chatman of San Francisco, was pronounced dead at the scene.

The victim was transported to a local hospital where he was treated for his injuries, survived and continues to recover.

Police released the bizarre details of the shooting last Friday, the day after the teen who pulled the trigger was arrested. Due to his age, his name has been withheld. He faces charges for suspicion of murder and attempted robbery.

The incident remains under investigation and police are continuing to search for the other boys involved.