10 most talked about self-defense stories of 2013 (VIDEO)

Everybody loves a good self-defense story with a happy ending, i.e. the good guy prevails and the bad guy loses. But there are some stories that – for one reason or another – seem to stand out above all the rest.

Here is a look at some of the most popular, most shared and most commented on defensive gun use stories published on Guns.com throughout 2013. And no, George Zimmerman didn’t make the list because, although he can’t seem to avoid media attention, the Trayvon Martin shooting occurred in 2012. 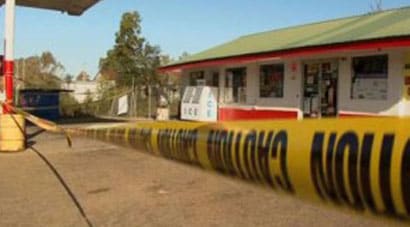 The suspect was shot by the store owner more than 10 times when he got greedy and returned for more cash. (Photo credit: WDAM)

1. Store owner shoots alleged robber more than 10 times after getting shot himself.

The suspect’s greediness turned out to be a fatal flaw when he returned inside a Bassfield, Mississippi, convenience store during a robbery in November.  He had already collected money from the register and shot the owner in the process, but decided to go back in for the remaining cash. Little did he know that in the moments while he was gone, the owner armed himself with a 9mm, then opened fired when the suspect returned, fatally shooting him more than 10 times.

When a man was asked to leave a Glendale, Arizona, party in October after becoming argumentative with several guests, everyone at the party thought the potential trouble was over. But when he returned minutes later with a rifle and started firing off rounds in the front yard, guests quickly realized that the trouble had just began. When the angry man turned the rifle on the guests, another partygoer pulled out his handgun and shot the man before he was able to pull the trigger again.

Even though December Long was shot in the abdomen, she still managed to return fatal fire on the would-be robber. (Photo credit: Northwest Ohio)

During a night shift in November at a Stop and Go in Toledo, Ohio, a man walked in with the intention of robbing the place. He shot the female clerk in the abdomen, but she wasn’t ready to give up without a fight and returned fire, fatally striking the suspect.

When a 17-year-old boy in Michigan made an attempt to play a jolted up version of the knockout game using a stun gun, he was met with surprise when his intended victim pulled out a .40 caliber handgun and shot him in the butt as he ran away.

While washing his car in his driveway on a Sunday evening in August, a Buffalo, New York, resident was approached by two armed men demanding cash and valuables. But instead of handing over his goods, he delivered several rounds into both suspects.

6. Intruder shot after locking resident in closet… where he keeps his guns.

Three armed intruders broke into a Houston, Texas, home in May, attacked the resident and then locked him in a bedroom closet. Little did the intruders know that the closet where they stashed their victim was also the closet where he stored his firearms. The man emerged from the closet minutes later and shot one of the suspects, sending the other two fleeing.

Apparently the suspect didn’t take too much time thinking through his plan before he attempted to rob a gun store in Beaverton, Oregon, in July with a baseball bat and a knife. Once in the store, he smashed a glass case and grabbed an unloaded handgun. Not surprisingly, the sights of the owner’s gun – which incidentally was loaded – were very soon trained on the suspect, where they remained until police arrived.

When a wanted man broke into a Kansas City, Missouri, home in September looking for keys to a car to escape from police after an early morning crime spree, the homeowner wasn’t quite ready to just hand them over. The homeowner became involved in a physical confrontation with the intruder while his wife and young child hid in a bedroom closet and called 911. The man attempted to take the homeowner’s shotgun from him, but ended up with a fatal gunshot wound instead.

When a man returned to his Texas City home in June only to be confronted by two armed men in his driveway who demanded that he “give it up,” the man gave it up, but not quite the “it” that they were after. The victim shot and killed one of the suspects, which sent the other one fleeing and was later caught by the police.

When two men met outside a Fort Worth, Texas, cell phone store in April to complete a Craigslist transaction, one man thought he was selling a phone and the other thought he was about to score some easy loot, but it turned out that both men were wrong. The one man was carrying a concealed firearm along with the cell phone and when the other man attempted to rob him, he was fatally shot instead.