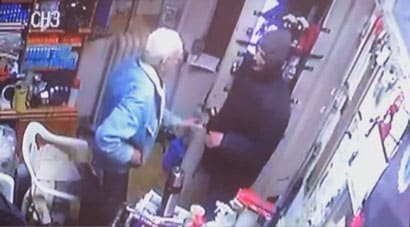 The 90-year-old pistol packing business owner said he wasn’t even scared when the young lad tried to rob him because he was the one with the gun. (Photo credit: Fox)

When a young man entered a Dayton, Ohio, laundromat Monday evening and demanded money from the 90-year-old owner, he was met with surprise when the old man not only told him no, but shoved a gun in his face.

George Hicks, who has owned the business for 12 years, told Dayton Daily News, “He come in and he looked at the pop machine and he walked around and he asked me if I’d give him change.” But when Hicks opened the cash drawer to get the man change, he shoved the old man and said, “No, I want all your money.”

Hicks wasn’t about to hand over his hard-earned cash though.  Instead of reaching into the cash drawer, Hicks reached into his pocket and pulled out a pistol, which sent the would-be robber running.

“Did he take any money?” the dispatcher asked.

Hicks was the target of another robbery back in 2010, but that time he wasn’t able to take a bold stand like he did on Monday. He was knocked to the floor and beaten before the robbers took off with his money. He was unarmed at the time.

But Hicks admitted that this time around he wasn’t even scared. “Why get scared? I’ve got the gun and he’s running,” he told reporters the day after the incident.

Tom Mauro, who owns a drive-through convenience store a few doors down is proud of Hicks for standing up for himself. “I want to shake the man’s hand,” he told reporters.

And Mauro is no stranger to crime either. In September two masked men walked into his store and demanded money, but Mauro was armed at the time and shot one of the suspects in the chest.

“Sometimes you just have to take care of things yourself,” Mauro said. “I work seven days a week here and I really don’t want people coming in here taking what doesn’t belong to them. I won’t put up with it.”

Mauro believes that business owners have the right to not only protect themselves, but their property and employees as well.