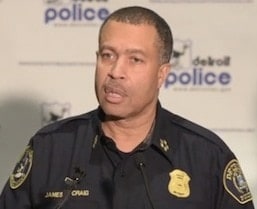 Encouraging responsible, law-abiding Americans to carry concealed firearms for self-defense has the potential to reduce crime.

This is a widely held belief by the gun community. It is also one that is endorsed by Detroit Police Chief James Craig.

Last month, in an appearance on a local radio show, “The Paul W. Smith Show” on WJR, Craig voiced his support for allowing responsible citizens to carry.

“There’s a number of CPL holders running around the city of Detroit. I think it acts as a deterrent,” explained Craig, who appeared on the show on Dec. 19. “Good Americans with CPLs translates into crime reduction. I learned that real quick in the state of Maine.”

Before taking the job in Detroit, Craig worked on the Los Angeles police force for 28 years as well as in Portland, Maine, where he was also the chief of police.

At a recent press conference, Craig doubled down on his pro-concealed carry stance and discussed what led him to embrace this position.

“Coming from California where it takes an act of Congress to get a concealed weapon permit, I got to Maine, where they give out lots of CCWs, and I had a stack of CCW permits I was denying; that was my orientation,” said Craig at a press conference on Thursday, where he noted that the city has witnessed a 7 percent drop in overall violent crime in 2013.

“I changed my orientation real quick,” he continued. “Maine is one of the safest places in America. Clearly, suspects knew that good Americans were armed.”

Though, Craig is not completely pro-gun. The chief also supports banning so-called ‘assault weapons,’ regulating so-called ‘high-capacity’ magazines and expanding background checks to cover gun transfers made via the Internet and at gun shows.

Nevertheless, some feel that he deserves credit for taking a stand that is rather unpopular amongst police chiefs, particularly those in major cities.

“It’s a huge, radical departure for the police chief to say good people should have access to firearms,” Rick Ector, a gun safety instructor, told The Detroit News. “I’m not ready to say he’s pro-gun just yet, but it’s vastly different from what police chiefs have said in the past.”

Of course, Craig has his fair share of critics, those who believe that more guns in the hands of law-abiding citizens is not he answer to violent crime.

“I think at its core, his position is an emotional one, based on the idea that people feel safer when they have guns. But studies have shown more guns don’t deter crime,” said Robyn Thomas, director of the the Law Center to Prevent Gun Violence in San Francisco.

“There’s no research that shows guns make anyone safer, and it does show that, the more guns in any situation, the higher the likelihood of them harming either the owner, or people who have access to them,” she continued.

Although crime is down in the Motor City, it’s still at a relatively high level.  Last year the city recorded 333 criminal homicides, 1,161 non-fatal shootings and 14,252 violent offenses. The city of New York, by comparison, had the same number of criminal homicides but has 10 times the amount of people.

All of Detroit’s woes won’t be solved by simply encouraging residents to carry concealed.  However, it’s certainly a step in the right direction.