The Model 929 is a full-size revolver with an eight-round cylinder, chambered for 9mm Parabellum and it uses moonclips. As the name implies, it was designed with help from champion shooter Jerry Miculek. The revolver has a very clear purpose, and that’s revolver competition shooting. 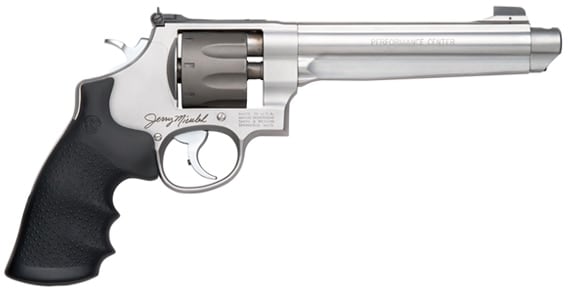 With its solid frame and long barrel, it’s guaranteed to be a low-recoil revolver that will ensure making minimum power factors with very lightly-loaded cartridges. While shooters will find many other uses for the 929, at its heart it’s a race gun.

The question of whether or not the 929 signaled future 9mm revolvers from Smith & Wesson has been answered. Smith is indeed announcing at least one more 9mm revolver with the new Model 986 Pro.

While the 986, too, is a large moonclip revolver, it’s a little more practical with a smaller seven-shot cylinder and shorter five-inch barrel. It has an underlug that tapers up to the muzzle after clearing the ejection rod and unlike the 929, does not have a compensator. 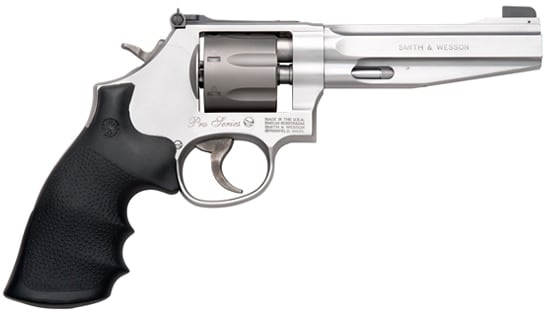 This is a target shooter although it wouldn’t perform too badly in run-and-gun, either. It has adjustable target sights and a lightweight titanium cylinder for faster lock times between shots.

The second new 9mm wheelgun from Smith is still up there, and we’re sure more than a few people would like to see a service-size or a snubnose revolver chambered in 9mm at a more affordable price. 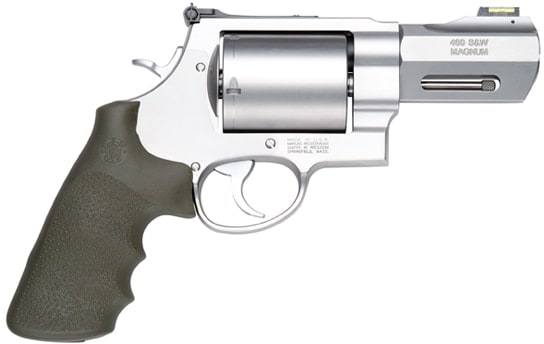 Next up is the .460 S&W Magnum Performance Center Model 460 XVR. This is going to be a real flame-thrower, combining the extremely powerful .460 S&W cartridge with its compact three-and-a-half-inch barrel. Despite its short barrel the gun weighs five pounds unloaded, which is necessary for revolver this powerful.

While it’s possible to use this for hunting, protection in bear country, self-defense or target shooting with its adjustable rear and fiber-optic front sights, we all know what this gun is for: seeing if it’s possible to have a gun so loud they kick you off the range.

Naturally, it will be less punishing to shoot with .454 Casull, .45 Colt and .45 Schofield, which it can also chamber.

The Model 460 XVR is clearly a “toys for boys” gun and in this case boys in sharp-lookin’ suits. The Model 460 XVR’s price is up there with its impracticality at $1,609. It is a Performance Center gun and comes with all the polish of a luxury car, which you would expect from a revolver that will proabably retail around $1,500. 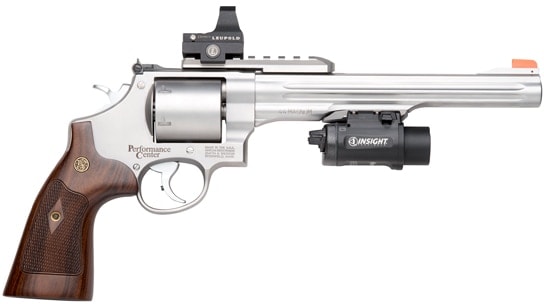 The Performance Center is also working on their version of the Model 629, simply called the Model 629 PC. This is a .44 Magnum for handgun hunters who simply want the best.

It is an 6-shot .44 Mag with a healthy 8.375-inch barrel that will no doubt get bullets moving at impressive speeds. The Performance Center 629 also weighs in at five pounds ensuring that it will tame the hard-hitting cartridge quite nicely.

The gun comes with all the bells and whistles. The topstrap is drilled and tapped for a Picatinny rail that’s long enough for both red dot sights and handgun scopes. It also has a railed underlug for use with accessories like lights and lasers — although it should be mentioned that in many places it may not be legal to hunt with lights or lasers. The revolver is big enough, maybe it’s for bayonets.

The Model 629 PC comes with factory adjustable rear sights, which is to be expected, but also a blaze orange pinned front sight.

Whether this gun is better for hunting or 21-century Dirty Harrying around is best left to the user. It is also at the high-end of the new crop of revolvers at $1,399. 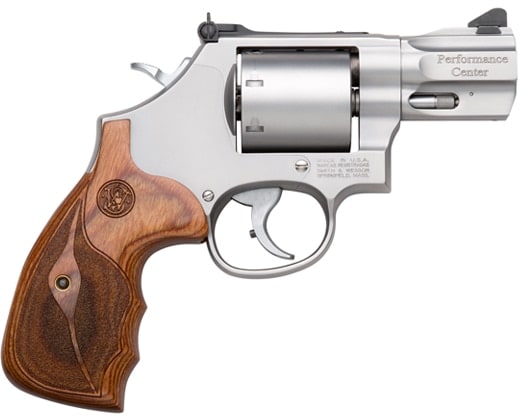 Finally we get to the new Model 686 PC. This is least expensive, most practical and likely to be the most practical of the new revolvers, an 7-shot .357 Magnum revolver with a short, but not too short, two-and-a-half-inch barrel.

While big for concealed-carry, it’s not out of the question and at 36 ounces weighs the same as many steel-framed guns people pack every day. It won’t be out of place at the range, either, fit with a dovetailed front and adjustable rear sights.

In addition to all the Performance Center features, this gun is cut for use with moonclips, for fast reloads for carry or competition. Naturally it can also fire softer .38 Special loads.

It’s still a Performance Center gun so the price tag is higher than other revolvers at $1,089. But it’s also a very utilitarian gun for people who simply want a fine snubbie.

UPDATE: Here are the other new wheelguns from Smith & Wesson. Thank you Rafael Santos for the tip!

Check out the new Model 69:

And the Model 66 Combat Magnum:

Is your dream revolver among the new Smiths for 2014? If not, what is it?