With everyone’s hopes pinned on a single-stack subcompact 9mm Glock for this year’s upcoming SHOT Show getting blasted apart by pretty strong rumors that the gun is actually going to be a .380, Remington is launching a new little beauty that might make all that moot.

It’s called the R-51 and it might be familiar to you, even if just in photos. The basic design of the R-51 is the same as the Remington 51, developed by John Pedersen, in 1917. Originally chambered for .380 ACP, the new model holds 7+1 rounds of 9mm in a compact, 20-ounce package.

The Reminton 51 was often said to be ahead of its time, and looking at the new R-51, it’s easy to see why. Both models use what Pedersen called “hesitation-locked” operation with a two-piece slide and locking block assembly. After firing the assembly slides back together for a short distance until the locking block engages with the frame, holding the cartridge just slightly out of battery while still providing a solid breech face. The barrel is fixed to the frame. 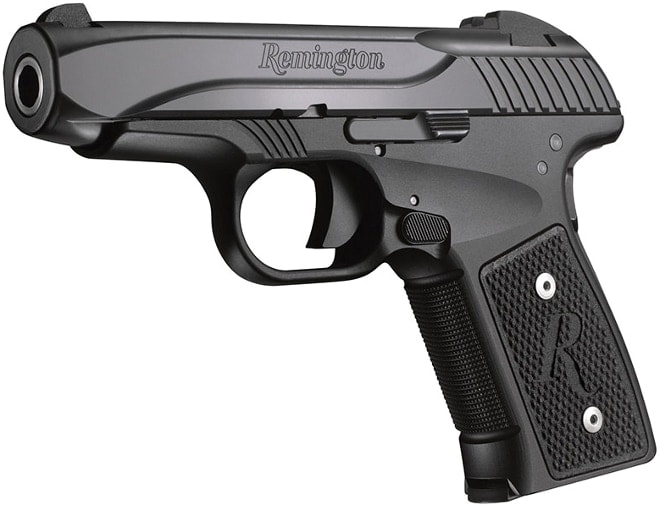 The design saw limited success during the Depression. It was passed over in favor of less expensive, although harder-recoiling blowback pistols and, of course, revolvers.

But today’s market for small semi-autos is bigger than ever and low-recoil service-caliber guns is where its at. By designing the R-51 for 9mm (and 9mm +P) with a .40 S&W on its heels, this gun is tailor-made for the concealed-carry market.

The design has a lot of advantages. Because it uses a fixed barrel it doesn’t need a guide rod and the whole upper is very compact. It’s not really bigger than most blowback designs but it has significantly reduced felt recoil. Part of this is because without a recoil assembly, the barrel has a very low bore axis. 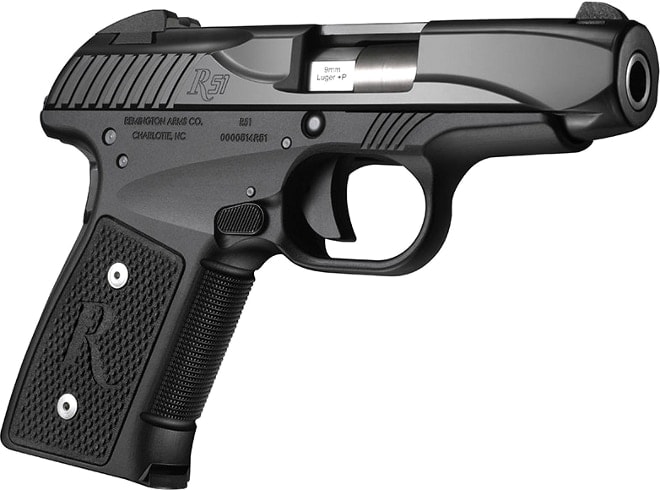 It is hammer-fired with a full hammer concealed under the slide above the long beavertail. The R-51 is a single-action pistol with a straight trigger bar for a 1911-like trigger break and a fast reset. The R-51 only has passive safeties, a firing pin block and a grip safety — the Remington 51 had a widely-criticized manual safety — so the new pistol will fit in perfectly with the modern concealed-carry crowd.

In addition to a new, highly-stylized swept look, the R-51 has dovetailed sights and an ambidextrous magazine release. The whole gun has been dehorned to ensure that it will not snag on the draw. Remington has also partnered with a handful of other companies to make sure that there will be holsters and night sights available for the R-51 when it launches.

Remington is already taking orders for R-51 pistols and will be shipping them in the first weeks of February 2014. Which brings us to one of the best things about this interesting little handgun. The MSRP is just $389. Street prices are likely to be even less than that.

So for about $350 — maybe less! — you can get an alloy-framed, single-action Pedersen-action 9mm in just a couple of months. Remington is expected to sell an extended, threaded barrel down the line for use with suppressors and will also offer different grip inserts for people with larger hands. Also, Crimson Trace has already developed a LaserGuard laser sight for the R-51.

The Firearm Blog and Gunblast’s Jeff Quinn spent some time with these guns at a recent shooting event at Gunsite Academy and have nothing, really nothing bad to say about this new pistol. And while Quinn is generally impressed by most guns the Firearm Blog is a much harsher critic.

Both came away saying the gun cycles smoothly, the slide is easy to rack, the grip and sights point naturally and the gun has very little recoil, even with +P ammunition.

At about six inches long, four-and-a-half inches tall and less than an inch wide, this is one gun that’s going to hit the ground running.