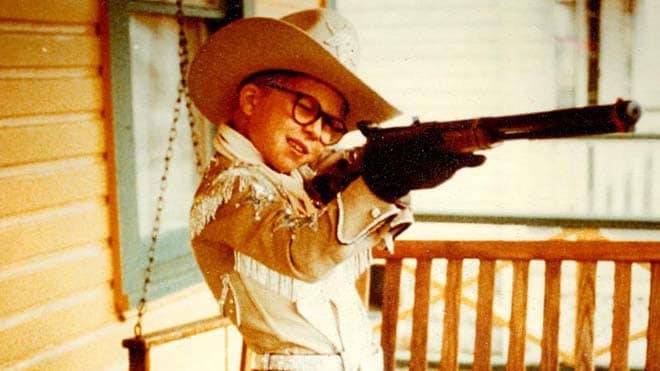 There will be no protecting the family from Black Bart or grizzly bears in the Garden State, unless, of course, that trusty old Red Ryder carbine-action, 200-shot, range model air rifle with a compass in the stock and this thing which tells time is properly registered with the state.

Under New Jersey’s gun control laws, children – and adults alike – could face steep penalties for illegally owning BB guns, which according to the Graves Act, makes little distinction between the childhood classic rite of passage and illegal big boy weapons like machine guns and sawed-off shotguns.

As reported by Fox News last month, various states across the country have different laws when it comes to airsoft or BB guns, but New Jersey by far has the strictest regulations. Violating the act, which includes mandatory registration and permits to purchase BB guns, can produce a minimum three-year jail sentence and hefty fines.

In fact, 22-year-old Idyriss Thomas was arrested in October after police received several reports of a man brandishing a firearm. As it turned out, Thomas was simply shooting a rubber ducky with an airsoft gun for target practics in the back yard of his Glassboro, New Jersey, home.

When officers responded to the calls, they determined that the airsoft gun was unlicensed. Thomas was arrested and charged with unlawful possession of a weapon.

“I didn’t realize that what I had in my hand would cause the events that happened today,” Thomas told local reporters after the incident. “I had the airsoft gun in my hand, playing with it, taking shots at a rubber ducky – not harming anybody.”

But it’s not just adults shooting rubber duckies in the backyard for target practice that are being affected by the tough laws.

“In all honesty, kids who are charged are looking at mandatory jail time,” said New Jersey attorney William Proetta, adding that a conviction could lead to prison time.

However, judges have the authority to issue waivers or even downgrade charges that fall under the Graves Act if such charges are brought through their courts, but they aren’t required to do either and, depending on the county, often don’t.

“The only defense is to request a waiver but if that’s not granted, young kids can get a felony charge and their lives are basically over,” Proetta added.

Joe Murfin, spokesman for Daisy, makers of the classic Red Ryder BB gun, said that while the company doesn’t agree with the opinion, they will still respect and attempt to uphold individual state laws.

“In our opinion and the federal government’s, our products are not firearms as there is no combustion in the chamber,” Murfin said. “While we disagree, we respect a state’s law for whatever reason they may have one.”

According to the Gun Control Act of 1968, 18 U.S.C. Section 921(a)(3), a “firearm” is defined as “(A) any weapon (including a starter gun) which will or is designed to or may readily be converted to expel a projectile by the action of an explosive; (B) the frame or receiver of any such weapon.”

Even the Federal Bureau of Alcohol, Tobacco, Firearms and Explosives makes a distinction between airsoft, BB guns and their big boy counterparts. According to the ATF website, “air guns, because they use compressed air and not an explosive to expel a projectile, do not constitute firearms under Federal law.”

Yet still, regardless of the federal firearm definition, the state of New Jersey sees no difference and lumps the classic childhood toy with laws regulating machine guns and sawed-off shotguns, which obviously are very different.