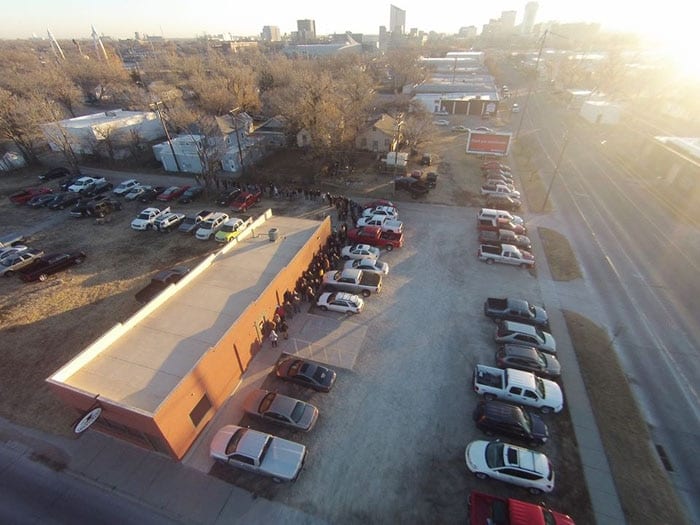 I have in-laws in Wichita.  Trips out for Christmas have always been focused on family.  But not so much this year, at least not for me.  I wanted to make my break productive.  So instead of drowning in eggnog and avoiding political discussions, I flew out to the sunflower state with a mess of guns, intent on doing some shooting for upcoming reviews.

A quick search for a range turned up Thunderbird Tactical, a class 3 FFL that stocks a wide variety of NFA firearms and tactical gear.  The store hasn’t been open long, and they’ve already made their mark on the shooting community in Wichita.  They’re expanding, and building a kick-ass new indoor training center that will incorporate all of the latest simulation and live fire capabilities. 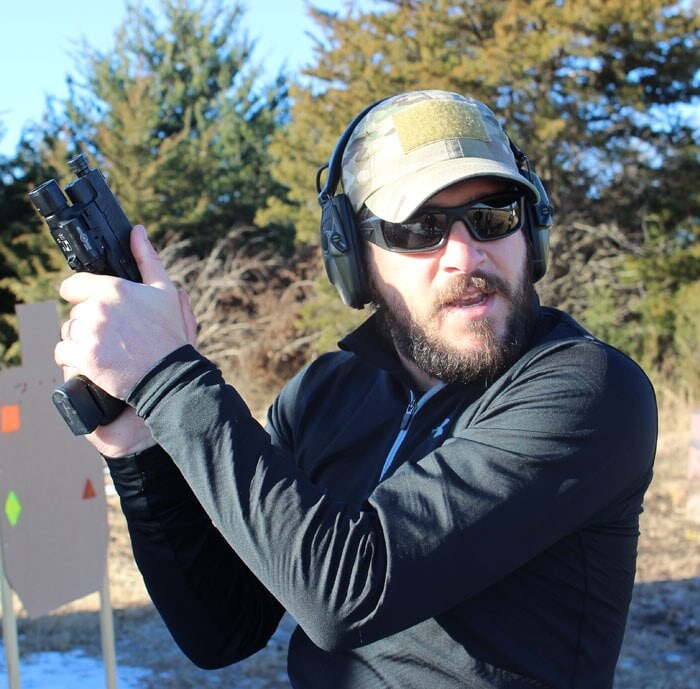 While they’re expanding, they’re holding classes on an private range east of town, in the flat windswept prairie that dominates the center of the continent.  In searching for a place to shoot, I ended up with an invitation to attend a class.  It was there that I met Daniel Shaw, Thunderbird’s tactical guru, for a full day of handgun work.

A bit of background.  I’m a college professor.  I’ve been teaching writing and literature for more than 15 years, and I know a good class when I see one.  And I’m an avid shooter.  I get a lot of trigger time.  My skills are better than average, for sure, but I can always use practice.  Still, I went to Thunderbird’s Handgun Vitals 1 class with the assumption that I would know the curriculum inside and out.  Wrong.

Shaw is an excellent instructor.  He’s a veteran, recently retired from the Marine Corps, and does a bit of writing, and a lot of pod casting.  Despite ample combat experience and a history of tactical instruction (both in the service, and out), Shaw was refreshingly casual.  He showed up for the class in jeans and a ball cap, almost completely devoid of the typical gear associated with tactical trainers.

There were only four of us in the class this frigid Saturday morning, crunching around in a muddy crust of thawing snow.  We began with a basic safety briefing, and moved quickly into holster work.  Shaw’s curriculum allowed for quick adaptation to our respective skill sets and we were well beyond the basics within the first hour. 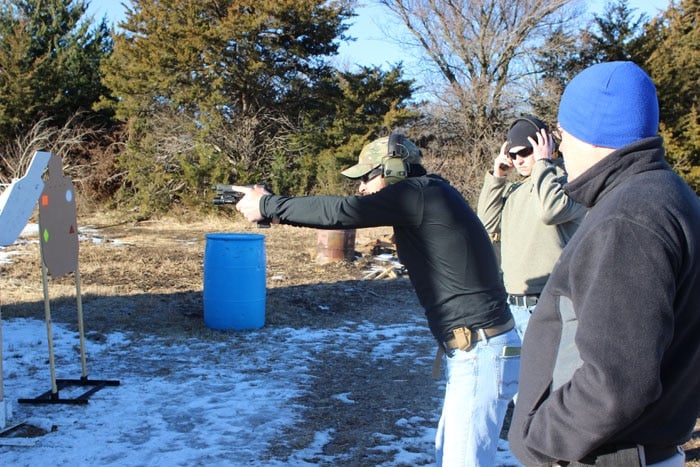 We started with basics and ended with stress. (Photo by David Higginbotham)

The seven-hour class covered a wide range of skills.  Holster work and reloads, clearing jams and stoppages,  tactical reloads and target identification: the fundamentals necessary for those who carry a handgun.  After a brief lunch break, the seven-hour course got really demanding.  We began with basic movement drills, and ended with a practical exercise that included a 100 yard sprint, before shooting a sequence of targets called out by colors, shapes, numbers and mathematical equations. 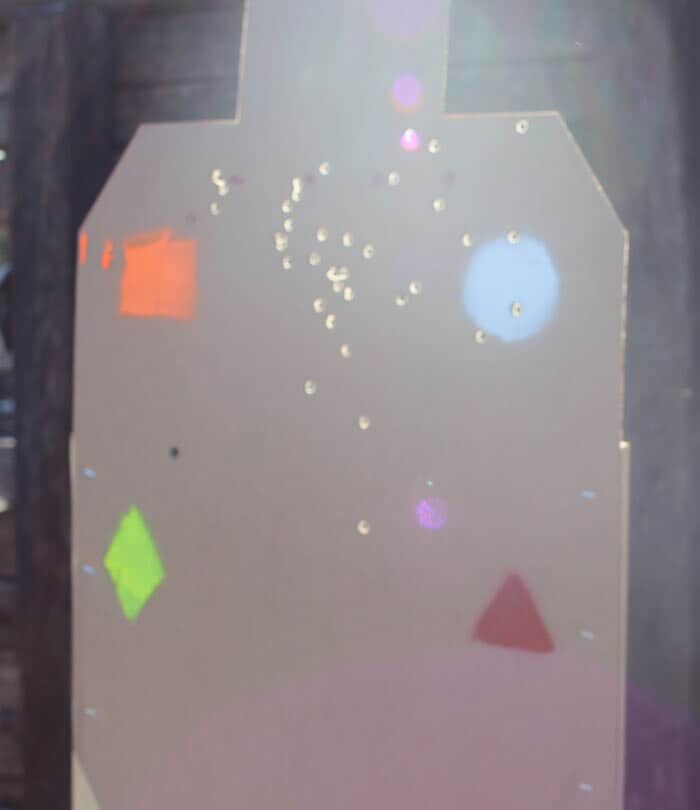 The Glock 23 was harder to control at higher speeds. (Photo by David Higginbotham)

Let’s start with the gun.  I took a Glock 23 with me to the class, and used a Safariland ALS holster.  After 400 rounds, I have decided the Glock 23 isn’t my daily carry gun.  While I’m decently fast from a retention holster (1.32 seconds), my split times (and accuracy) aren’t what I want.  The snappy recoil of the .40 S&W in the compact Glock means my second shots ran high.  I’m now on the hunt for a full sized 9mm.

I was also shocked at my limitations.  If I were to grade my performance, I would give my self a B-.  The last sequence of running and shooting was intense.  Shaw was in my ear the whole time, barking commands, telling me where I needed to shoot.  His objectives were clear.  Run.  Pick out targets.  Shoot.  Move some more.  Shoot.  Listen for the next command and communicate, verbally, about reloads and stoppages.

I made the run just fine and started strong with the shooting.  Yet I never once communicated verbally, though I cussed a lot.  And there is one moment stuck in my mind.  Shaw yelled “Three!” and I lined up my sights on a steel target with the number 2 painted on it.  I could see target 3 next to it, and I knew which one I was supposed to shoot, and I shot number 2.  Bang. 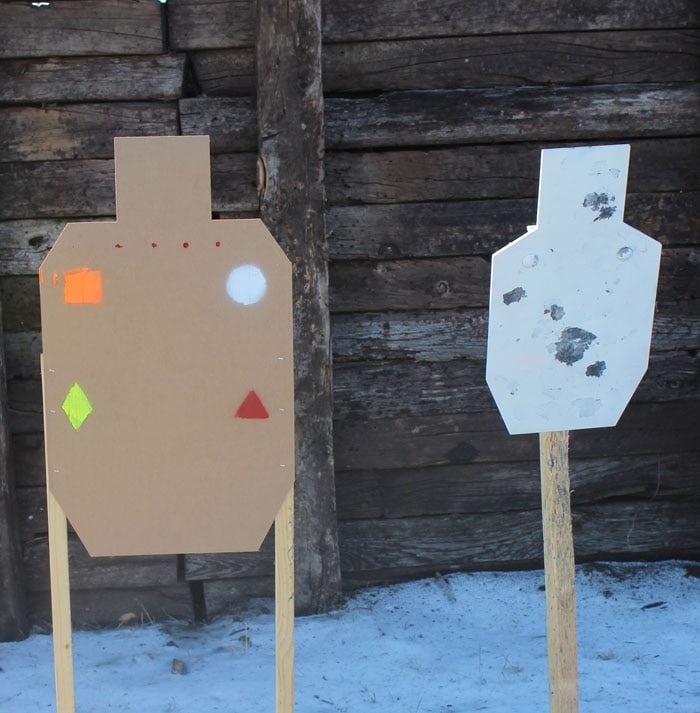 One target prints well, the other rings. A good combo for handgun training. (Photo by David Higginbotham)

I see my weak spots.  I’m now on a daily schedule of dry-fire exercises.  But I’m going to have to reevaluate the way I’m doing defensive handgun reviews.  I’d been carrying the Glock 23 for weeks.  I loved the gun.  Yet after seven hours, and only 400 rounds, I had a much different take on the gun.  There are weaknesses of the gun that are apparent after a full day of training that I missed when I was simply carrying the gun, and function testing it under completely stress-free circumstances.

I have to devise a better way to test defensive handguns.  A protocol.  Something that will reflect the experience I had with Shaw and the others in Handgun Vitals 1.  I owe that to you, the readers of Guns.com.

So there’s my resolution.  I’ll be working on the practical nature of my review routine.  And I’m going to take every opportunity I can to sit in on a class, even if the curriculum seems a bit basic for my skill set.  I’m never too good for practice.

If you ever find yourself in Wichita, check out the schedule for Thunderbird’s training.  You won’t be disappointed.