Benelli has developed a new series of hunting shotguns for 2014 that use an improved version of their famous inertia-operated action. These shotguns, using the new design, offer a new level of reliability and safety that make a case for upgrading.

Benelli’s inertia-operated action has become free-to-use for a time now and companies across the board are adapting it for their own purposes. Browning, Franchi and Stoeger are just three names that have put new shotguns on the market using the now-public-domain Benelli action.

The Ethos is their way of staying ahead of the game. Fundamentally it remains built around the inertia-operated action that has set a standard for reliability, but improves it with their new “easy-locking system.” The improved inertia action ensures that if something tugs on the charging handle that it will return to battery on its own.

This means that if a hunter is out in the field and something snags on the shotgun without the hunter noticing, the shotgun will still be good to go for that one perfect shot. And it prevents an out-of-battery discharge, which can be dangerous to say the least.

The easy bolt system will also close and lock even if the bolt is ridden. Riding the bolt — closing it manually and not letting it slam shut on its own — is a common mistake made by new shooters and the usual result is a bolt that’s only mostly closed. This is just as bad as something snagging on the charging handle and pulling a shell out of battery.

This also means that the gun can cycle very light loads without worrying about short-stroking the bolt. The improved inertia action is designed to run everything, even ultralight 7/8-ounce loads which a lot of semi-auto shotguns have troubles with. Ethos shotguns are chambered for up to three-inch shells and is more than capable of handling heavy loads as well.

“The superbly balanced Ethos is designed with all the features that make this latest Benelli semi-auto not only a pleasure to shoot, but also a beautiful gun to own,” said Tom DeBolt, Benelli VP in a press release. “Shooters will enjoy the benefits and pleasure of handling and shooting a top-quality semi-auto shotgun that embodies the perfect balance of art and technology to specifically meet their needs, whether it be for upland birds in the field or clay birds at a range.”

The new Ethos line of shotguns is fairly premium and will be offered in engraved and non-engraved versions with barrels of various lengths starting at about $2,000. Fortunately, this is Benelli we’re talking about so you can be sure you’re getting your money’s worth.

The Ethos shotguns are loaded with features not limited to the improved action. Benelli is taking the lead from competition shooting with their new guns which have a lot of tweaks more commonly found at a 3-gun match. 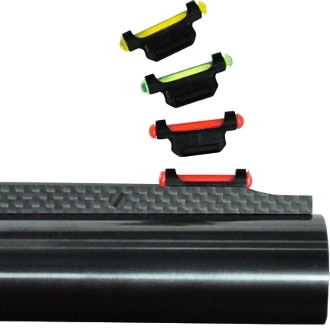 First up is a set of included interchangeable fiber optic sights. Ethos shotguns will come with three, one yellow, one green and one red, giving the user options for different shooting conditions or simple preferences. The sights mount onto a removable carbon-fiber rib. This allows the shooter to easily change rib heights without having to replace the barrel entirely and replace a rib if it ever gets damaged in the field.

The fiber-optic rib also helps make the Ethos a lightweight shotgun. While a rib admittedly doesn’t add a lot of weight to a shotgun, it does add mass to the front end and every ounce matters. Overall the Ethos weighs 6.5 pounds unloaded.

The barrels themselves are high-end, having been cryogenically-treated along with the interchangeable Crio chokes. Cryogenically-treated barrels are stress-relieved with liquid nitrogen for more consistent shot patterns, particularly after long shooting strings which tend to open up unevenly. It’s a small touch but it’s part of the Ethos premium.

Another run-and-gun-inspired change is an enlarged, beveled loading port and along with it a two-part carrier latch to make loading fast and easy on the hands. Benelli enlarged the bolt release as well and reloacated the cartridge drop lever to inside the trigger guard for ease of access.

The stocks are carved out of AA-grade European walnut and incorporate a recoil-reduction system in addition to sporting a thick rubber buttpad and padded rubber comb. The combs are interchangeable as well, for use with optics or tall ribs.

Many other parts have been redesigned, including the enlarged recoil reduction system, anti-seize magazine cap and improved follower. Hopefully Benelli will take the Ethos improvements and carry them over to other models in the future; they’re a lot of little changes that make the Ethos stand out in an expanding circle of inertia-based shotguns.

All the details about the four models of Ethos shotguns, 26- and 28-inch matte and 26- and 28-inch engraved, can be found on the product page. The Shooting Times has a review of the Ethos and the write-up is quite flattering.

“The Ethos passed all the tests with flying colors,” wrote Mike Schoby. It was a real pleasure to shoot, and recoil was nearly nonexistent. That final day’s shooting was pleasure mixed with a bit of sorrow as I knew my M1 was going to be relegated to the gun safe because the new Ethos was just that much better.”