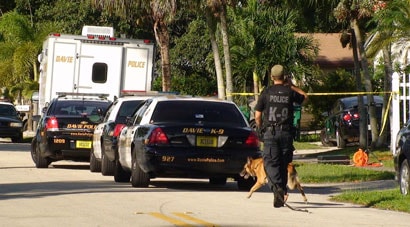 One of three suspects was fatally shot Thursday night just before 8 p.m. by a resident armed with an AK-47 after an apparent attempted robbery in Davie, Florida, just outside of Fort Lauderdale, went awry.

The details of the incident that have been made public are still a bit sketchy, but according to a report by NBC Miami, three armed suspects entered the man’s apartment with the intentions to rob him and caused severe injuries when they pistol whipped him.

However, at some point during the altercation, the man was able to retrieve his AK-47 and fought back against his assailants.

The man fired at the suspects as they were fleeing, striking one in the leg several times and fatally wounding him. Capt. Dale Engle of the Davie Police Department confirmed that, “Two people were shot, one seriously injured,” although it is not known at this time who was the second gunshot victim, whether it was the resident or a second suspect.

The resident was left severely beaten. The suspect who was shot was also left behind by his accomplices and was found outside the front door of the apartment when police arrived a short time later.

Engle stated that an AK-47 was found in the grass near the home. The resident was taken in for questioning, but has since been released. Engle also confirmed that the resident has fully cooperated with authorities.

No arrests have yet been made and the remaining two suspects are still at large.

The names of the victim and the suspects have not been released, but police said that the four were acquainted with each other.