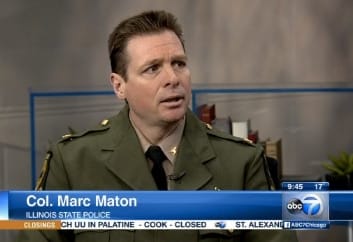 Col. Marc Maton of the Illinois State Police answers questions about the new concealed carry law that went into effect on Sunday.

Sunday marked an historic day for law-abiding citizens in the Land of Lincoln. It was the first day that they were allowed to apply for concealed-carry permits under a law passed in 2013 that struck down the state’s longtime ban on concealed carry.

Prior to the passage of the law, which was foisted on the Legislature after a federal judge ruled that the state’s ban on concealed carry was unconstitutional, Illinois was the sole remaining state to prohibit concealed carry. Now only Washington, D.C., prohibits residents from carrying concealed.

Now that the law is in effect, prospective CCW applicants must fill out digital forms and submit their applications online to the Illinois State Police, who will have between 90-120 days to approve or reject the applicant (90 days if applicant’s fingerprints are submitted, 120 days fingerprints are not included).

According to the ISP, the system is prepared for a deluge of applications. “We’ll be ready,” said Monique Bond, chief of communications with the Illinois State Police, told the Chicago Sun-Times.

When drafting the law, legislators estimated that between 300,000 to 400,000 Illinoisans would eventually become concealed carry permit holders, added Monique.

In total, there are more than 8 million active CCW permit holders in the U.S., according to the United States Government Accountability Office.

With that said, what does an Illinoisan need to submit to obtain concealed carry permit? Well, included in the application must be the following items:

-Electronic Copy of training certificate(s). One will be required to upload his/her electronic certificate during the application process.

-A head and shoulder electronic photograph taken within the last 30 days.

-Be able to provide the last ten years of residency.

NOTE: Applicants will be assigned a transaction control number (TCN) at the time of fingerprinting and will be required to retain that TCN to complete the application.

-$150.00 fee payable with a credit card or electronic check, for residents. For out-of-state applicants the fee is $300.

However, in addition to that material, one must satisfy the following background check-related criteria:

-Not have been convicted of a misdemeanor involving the use or threat of force or violence or have two or more violations related to driving under the influence of alcohol or drugs in the past five years.

-Not have been in residential or court-ordered drug or alcohol treatment in the past five years.

-Not have a pending arrest warrant, prosecution or proceeding for an offense that could disqualify them.

One may have their CCW revoked for:

-If the person no longer meets the basic requirements for the license or eligibility requirements of the Firearm Owners Identification Card.

-If the person has three violations of the act, for example, three instances of carrying where concealed weapons are not allowed.

-If a person has more than one violation of carrying a concealed firearm while under the influence of alcohol, drugs or a combination of both.

The CCW permit is only for handguns, which must be concealed from public view at all times, other weapons like stun guns, tasers, shotguns, modern sporting rifles, etc. are not allowed.

Though, police chiefs have acknowledged that there is discretion with the law and that it won’t be rigidly enforced, e.g. if someone accidentally exposes his/her firearm or walks into a place that bans concealed weapons.

“We will deal with it on a case-by-case basis. The good thing is there is discretion. We have discretion in enforcing virtually any law. We will rely on officers’ good judgment to make a determination whether an arrest is necessary,” Mike Metzler, Mahomet police chief, told The News Gazette.

“We will give people the opportunity to adjust,” he continued. “We will stop them and give them warnings and educate them rather than to immediately start cracking down and issuing tickets.”

Places where one is prohibited from carrying a concealed handgun include: schools, child-care facilities, courthouses, public transportation, college and professional sports stadiums and in any establishment where alcohol sales make up more than 50 percent of the business’s receipts.

For the full details check out the state’s website: https://ccl4illinois.com/ccw/Public/ISPFaq.aspx