You may have heard of it. You may have even seen one. And you may have thought, “only if”.  But despite the tax stamps and “civilian model blues”, this amazingly hyped cutting-edge firearm, the KRISS Vector, is rapidly moving in many shooters’ minds from science fiction to science fact.

What is a KRISS, anyway? 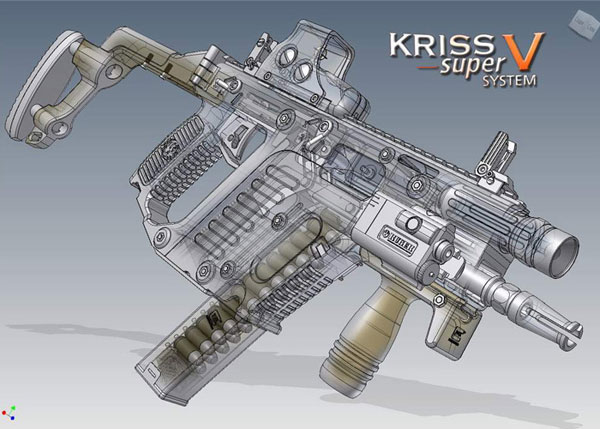 Around 2002, the gun world began to hear whispers that the Gamma International Company of Switzerland, led by one Renaud Kerbrat, had an interesting new weapon system on their workbench.

Kerbat was an engineer who held a number of patents in both medical equipment and armament and what he presented was, in spirit, a plan for a lightweight submachine gun.

Folding stocks and short barrels makes the KRISS an easy choice when shooting from cramped positions.

Dubbed the KRISS the gun was built for compactness. It would also use lots of “space age” polymers to reduce weight, yet still would be strong enough to survive hard service. Chambered in .45ACP, it was geared primarily to the world of Spec Ops and law enforcement who were certainly in need of a reliable, updated, hard-hitting room broom… 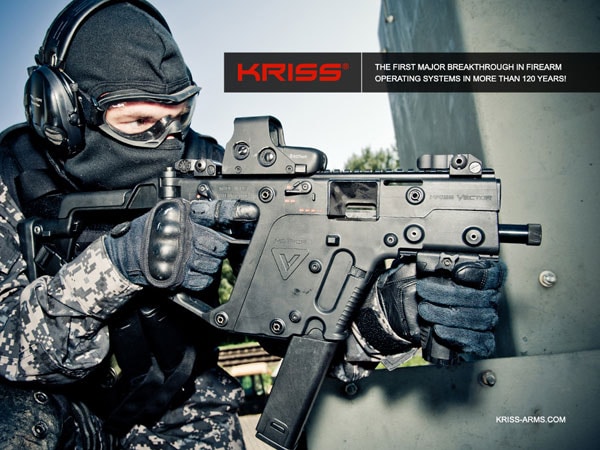 Quite the head turner…

But, was it really needed?

Even though most militaries have abandoned submachine guns for compact 5.56mm carbines, there remains a small set of professionals who use these weapons when nature calls. After all, subguns, especially the subsonic .45ACP chambered varieties, can be soothing when storming terrorist clubhouses and dangerous drug labs filled with explosive fumes. 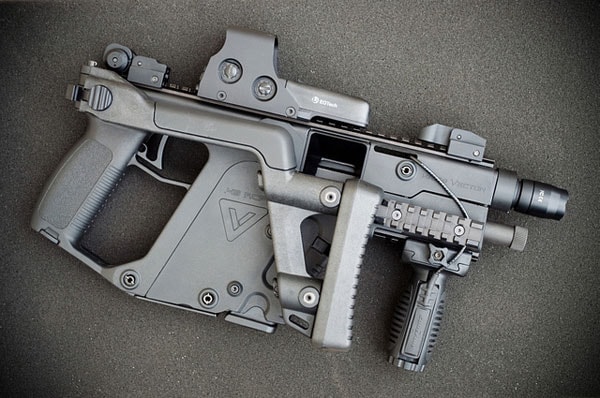 But, does something this sexy really need a reason?

Still, there are those that say, “Five pound plus submachine gun that fires .45ACP?  Been there, seen that.” For instance, the grandpa of the modern subgun, the old 1921-era Thompson with its bimetallic Blish lock weighed in at 9-pounds (without the wooden stock) but could still rip out a box of 230-grain FMJs at 700-rounds per minute.

So with that being said, how is the KRISS gun any different? Well, my boy, let me tell you about the… 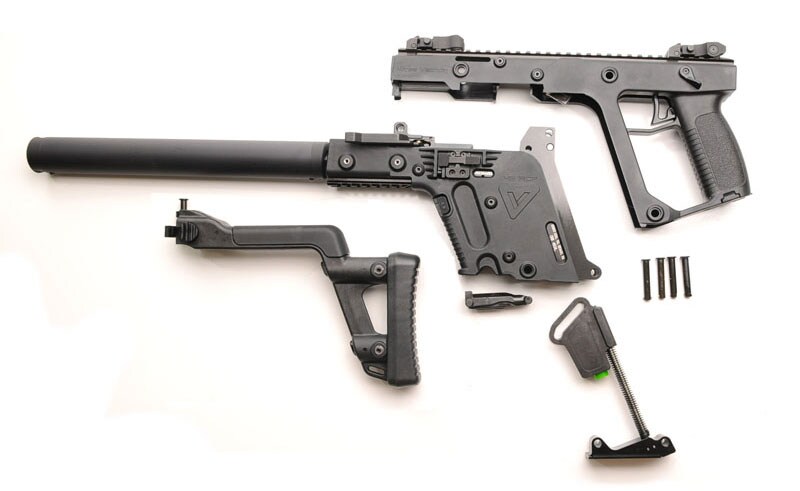 At the heart of this innovative new gun is what is known, by the company, as the “Kriss Super V” action.

Bottom line: it’s a blowback action, which in itself is not very new. In fact, if you watch how the action cycles you can see that the blowback itself kind of looks like the trusty, toggle action used by Mr. Georg Luger back in the 1900s on his 9mm pistols—except of course that the two-piece toggle is much larger and upside down.

When the gun fires and the round goes off in the chamber, the bolt slides back and forth like your knee kicks out, only backward in a ‘V’ shaped motion. This toggle moves down into a large channel built near dead center of the gun, running along the outside of the magazine well. This housing gives guns using the KSV system their thick, boxy mid-section.

As the bolt gets pushed back by the recoil of the expanding gases in the fired round, it slides down a ramp into the channel, pulling the spent round with it. As the sliding action falls down the ramp, the shell casing is ejected out of a port and the bolt carrier keeps pushing downward and not backward, as in just about every other semi-automatic firearm. When fully exhausted, a recoil spring pushes the bolt carrier/bolt back up to the top of the V, chambering another round.

With this motion, the felt recoil goes downward into the base of the gun, counteracting the muzzle flip that would normally come with firing a round.

Why would this matter? 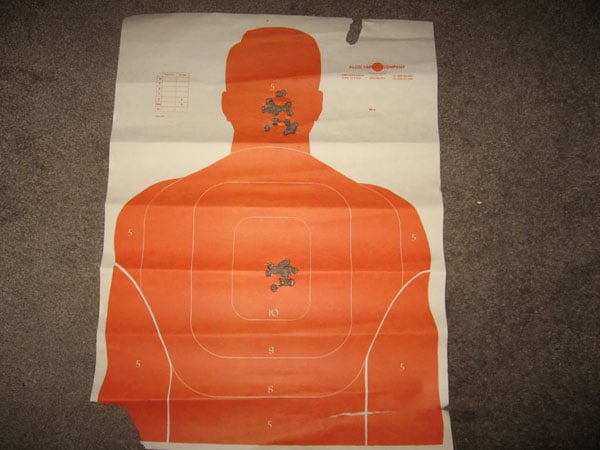 Grouping typical of a KRISS at 25 meters.

Since the muzzle blast and recoil is ate up by a large moving toggle mechanism that pushes back against the gun with almost equal and opposite force, the gun itself remains still. As any marksman will tell you, the more rock steady the gun, the more accurate it is going to be. 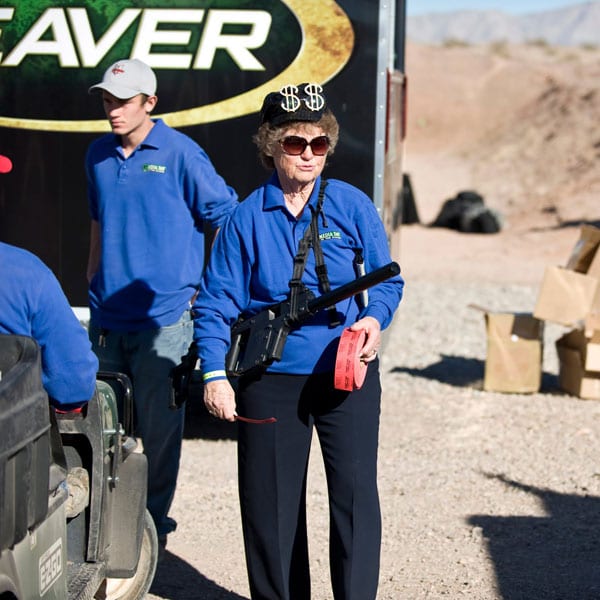 Also, with its low felt recoil, the KRISS Vector can give more sensitive shooters a much needed advantage.

That is the magic of the KSV system. Sure, the Kriss looks super weird—it more resembles an industrial stapler than a firearm. Nevertheless, it is capable of staying rock-steady on target while firing with its very low recoil.

The company states that in testing done at the US Army’s ARDEC Picatinny Arsenal in which prototype guns were placed on instrumented non-destructive bench-rests, they produced, “…6-inch groups at stand-off distances of 100m.”  In the same tests, the Army noted a reduction in muzzle climb of 90%, and a reduction in felt recoil of 60% when compared to the same figures for 9mm subguns such as the HK MP5.

The KSV system is also inherently fast. Although KRISS calls it a ‘delayed blowback’, truly the bolt carrier mechanism recoils less than a millimeter per every millimeter of bolt movement when in motion.  In effect, that really isn’t much of a delay. With that being said, the SMG version of the gun is able to go cyclic at 1200-rounds per minute. With a standard 13-shot Glock 21 mag in place that means it can be drained before you can say, “fast.” Of course, larger capacity mags can be fitted, but you get the idea. 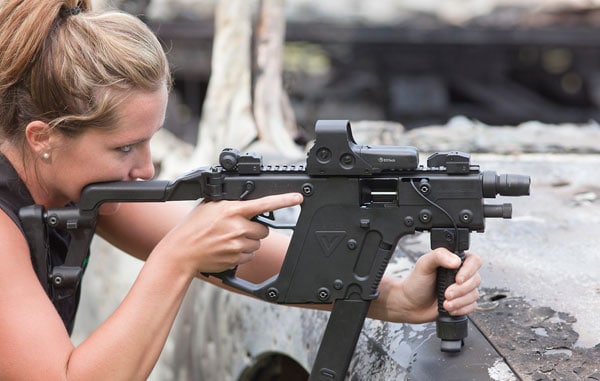 It’s so fast and accurate in fact, that in testing it often puts rounds fired in a two-round/ 0.10 second burst right on top of each other in the target. When we mean right on top, that is not an exaggeration. Lead pulled from berms and gel after two round bursts have been found with both rounds fused together Robin Hood style.

The KSV system allows easy one handed shooting if needed. Big deal you say, as other, more conventional submachine guns such as the UZI, HK MP7, and FN P90 can be fired without going dos manos.

The thing is, the Kriss can conceivably do this with far greater accuracy. 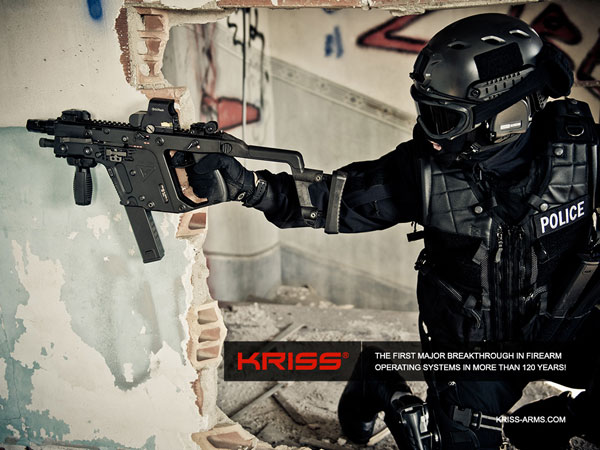 The gun was introduced to the world at SHOT Show 2007. 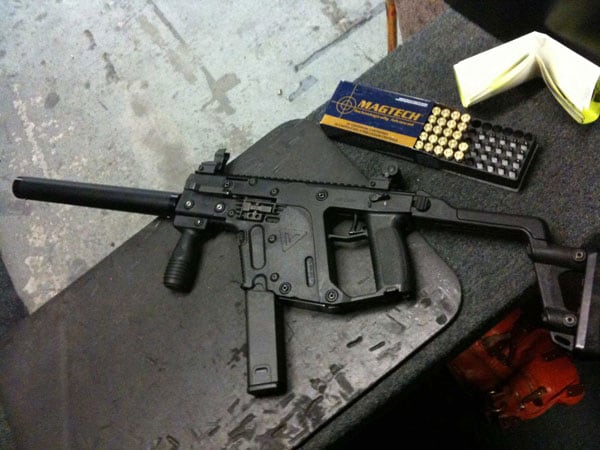 A KRISS Vector is a guaranteed conversation starter at your local gun range (and a whole lot of fun too).

The original outfit that introduced the Kriss into the states was Transformational Defense Industries, Inc. (TDI), which was a branch of Kerbrat’s Swiss-based firm of Gamma Industries.

Today the company has a US subsidiary, KRISS USA, Inc. in Virginia Beach that handles all sales and marketing in the US. However, its headquarters is still in the land of Cuckoo clocks and semi-secret bank accounts.

The outfit has gotten away from the term ‘Super V” in recent years, repurposing it to just refer to the style of delayed blowback action that these guns feature. Current models are all referred to as Vectors.

They all weigh about the same (5.2-pounds for the handgun Vector SDP to 5.78-pounds for the carbine) due to their shared polymer furniture and action. They also share the same top/bottom Picatinny Rails, ambidextrous F/S controls, and custom flip-up iron sights. 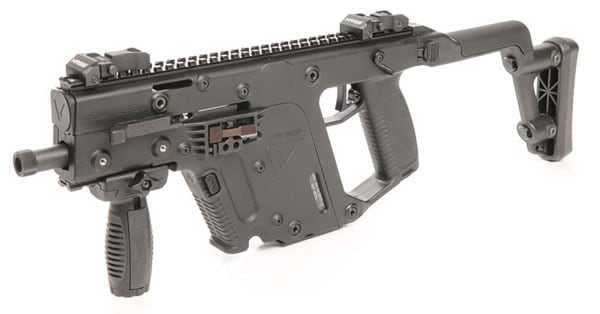 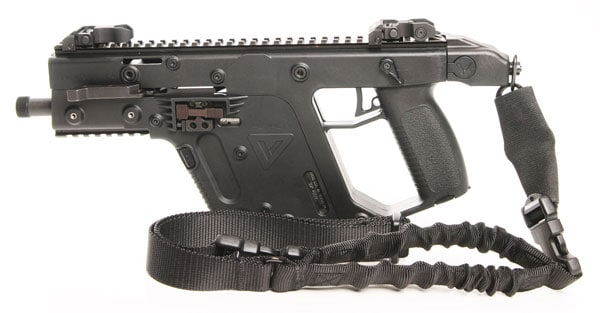 The Vector SDP uses a sling instead of a stock as it is officially a pistol.

There is the Vector 16.1-inch barrel semi auto-only (thus civilian legal) CRB carbine. The Vector 16-inch overall with a 5.5-inch barreled SBR short barreled rifle is out there for those who want to get a tax stamp (NFA rules apply).

If you want the short barrel but can live without the folding rifle stock, you can get the Vector SDP pistol without having to pay the BATFE an extra $200.  For the LE/military market (call your Congressman about the NFA!) there is the Vector SMG, a four-position, select-fire subgun.

The first three models run $1800 MSRP but can be found for a little less. So-called TAC versions, dripping with extra goodies cost a good bit more. The rock and roll version is “Contact us for pricing” on department letterhead. 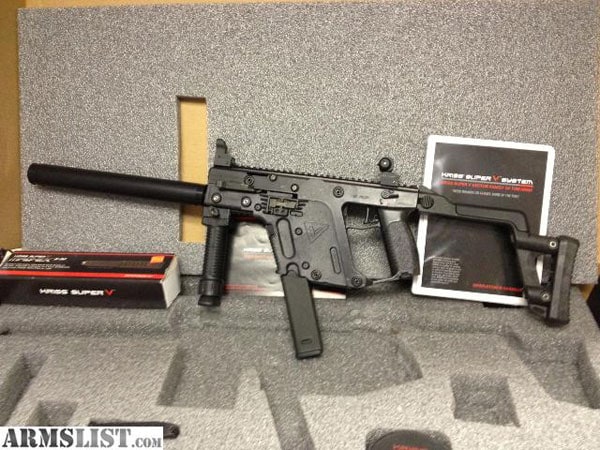 You are just now starting to see preowned KRISS Vectors on gunbroker and armslist at slightly better prices.

Since some of the newness is wearing off these interesting KSV system guns, it is not uncommon to find used (semi-auto) variants on Armslist and Gunbroker for around $1400. Still, when you factor that you can get a nice Beretta CX4 carbine and a Glock Model 21 pistol brand new in the box for the same price, you have to really be a fan of the Kriss to want to pick up one.