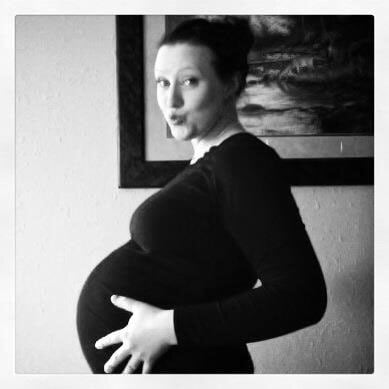 Professional shooting champion and self-described doting mom, Julie Golob discussed the topic of shooting while pregnant in a podcast last year and again this week with an eBook exploring the often overlooked but much debated topic.

“There is not exactly a wealth of information out there on the subject of whether or not to shoot while you are pregnant. Why? Women who shoot and hunt aren’t exactly the most studied demographic. Females in this group who happen to be pregnant represent an even smaller segment,” Golob writes in her eBook, “Shooting While Pregnant – A Resource for Expecting Moms.”

In fact, although there have been numerous studies on the three biggest concerns that may be present for a pregnant woman wishing for some range time – lead exposure, noise and other contaminants – there has not been a single study on those three areas specifically as it relates to shooting by the expecting mother.

Chances are if you ask 100 different people about the matter, you’ll get 100 different opinions, all ranging from one extreme to the other and everything in between. Some will claim that it’s absolutely forbidden, others will say that it’s perfectly safe, and yet others will claim that moms-to-be should use modified methods such as lower calibers and lead-free ammunition.

Nonetheless, women are much more likely to be exceptionally aware of their surroundings and possible dangers during pregnancy more than any other time, and until such a time when a study is conducted specifically on the safety of shooting while pregnant, expecting mothers – and fathers – can rely on the information that is available to make informed decisions. And in her eBook, Golob explores some of the concerns associated with pregnant women shooting.

According to the Environmental Protection Agency, “The effects of lead exposure on fetuses and young children can be severe. They include delays in physical and mental development, lower IQ levels, shortened attention spans, and increased behavioral problems. Fetuses, infants, and children are more vulnerable to lead exposure than adults since lead is more easily absorbed into growing bodies, and the tissues of small children are more sensitive to the damaging effects of lead.”

In addition, “Lead can cross the placental barrier, which means pregnant women who are exposed to lead also expose their unborn child. Lead can damage a developing baby’s nervous system. Even low-level lead exposures in developing babies have been found to affect behavior and intelligence. Lead exposure can cause miscarriage, stillbirths, and infertility,” the CDC warns.

Unborn babies may be exposed to lead through the mother handling lead-based ammunition and inhaling the lead-containing dust that is created when a gun is fired. However, it’s unclear how much lead is actually exposed to the unborn child when a pregnant woman is involved in shooting.

Nonetheless, Golob offers the following suggestions for reducing exposure to lead and other contaminants.

• Shoot lead-free ammunition. (Note: you may still be exposed to other harmful contaminants.)

• Use a respirator to limit inhaling lead dust.

• Use commercial wipes designed to remove heavy metal dusts, dirt, grease, and oil from the skin.

• Immediately wash all exposed skin with soap and COLD water.

• Remove range clothes as soon as possible and wash them separately from the rest of the laundry.

• Ask someone you trust to clean your firearm to avoid exposing yourself to lead, solvents, and other contaminants.

Another concern is noise. While the mom-to-be can use protective gear to guard her own hearing, it’s questionable whether the cushioning layers of the mother’s ever-growing belly and the fluid surrounding the unborn baby is enough to protect his or hers delicate and, depending on the stage of pregnancy, still developing ears.

Fabrice Czarnecki, M.D., co-author of an article cited by Golob, “Shooting While Pregnant: Dangerous or Not,” recommends that pregnant women avoid shooting altogether. “Noise exposure during pregnancy has been associated, in human studies, with several adverse outcomes, including miscarriage, intrauterine growth retardation, preterm delivery, hearing loss in babies and children, and hypertension in pregnancy,” Czarnecki stated.

“Pregnant women, who also are shooters, face the tough decision of if and when to stop shooting,” Golob adds. “Simply put, the best way to reduce exposure to the dangers is to avoid them all together. That means, no shooting and avoiding ranges, especially indoor ranges where exposure to lead, noise, and contaminants is greater. If you and your doctor decide that it is safe for you to shoot during a portion of your pregnancy, then there are ways to help reduce the risks to you and your baby.” 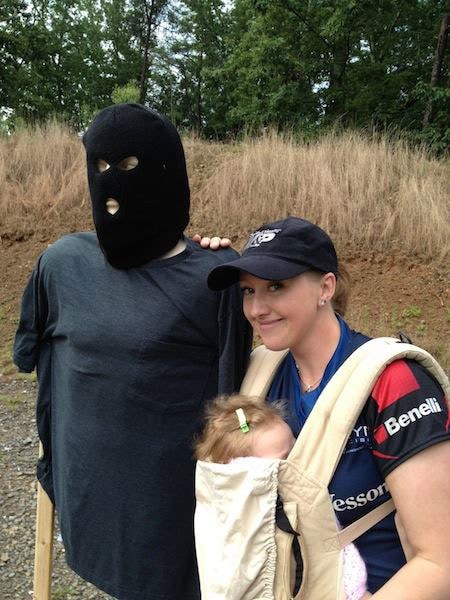 And for those who decide not to shoot, Golob offers some alternatives for staying on top of the sport while not exactly having to just stand around on the sidelines. These suggestions include dry firing and practicing with airsoft guns.

However, not all moms agree that range time has to be given up completely during pregnancy and some feel that the perceived risk to the unborn baby is less than that of the result of nine months of no additional training.

“From my personal perspective, our family goes to the range to keep up our self-defense shooting skills. That doesn’t change while I’m pregnant,” explains Lee Ann Stehle, who is a mother of three, including an 8-week-old, and whose husband, Nicholas, is a concealed carry instructor and chairman of Arkansas Carry.

“Shooting accuracy skills have to be maintained and I still need to be proficient with a firearm for our home defense and beyond. … However, I go to great lengths to make sure I’m very aware of what I am touching since lead transfer can occur, though the risk is minimal,” she adds.

Every woman’s circumstances – and pregnancies — are different and each individual is responsible for making an educated decision based on the knowledge that they have and their particular situation. Golob presents some useful information in an easily digestible and straightforward manner to help the decision making process a little easier. In short, she writes that the decision of whether to shoot while pregnant is one that should be made jointly by the expecting mother, her significant other and a health care professional.

Listen to Julie Golob’s podcast, “Should I Shoot While I’m Pregnant?” below.