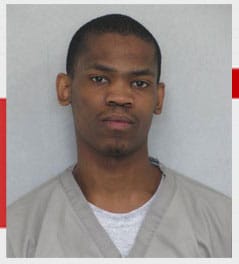 Anthony Darnell King had just been moved to a non-secure facility a week ago, but simply walked out. (Photo credit: Oklahoma City Community Correction Center)

An escaped convict’s short-lived crime spree came to an abrupt end when he chose to rob an off-duty Oklahoma Highway Patrol trooper on December 27.

According to local reports, 22-year-old Anthony Darnell King approached John Marion at gunpoint while he was in the garage of his Oklahoma City apartment. King demanded cash and valuables from the man, who then led him into the home and upstairs to retrieve what King thought he was after.

However, once in the home, Marion opened fire on King, striking him at least once. Marion immediately called 911, identified himself as an officer and explained what had occurred.

Police arrived just before 7 p.m. and found King unresponsive in the home. He was transported to a local hospital where he died as a result of his injuries during an emergency surgery.

King had been serving a three-year sentence at the Oklahoma City Community Correction Center for assault with a dangerous weapon and possession of a stolen vehicle. He was due for a parole hearing in June and had just been transferred to Carver Transitional Center in Oklahoma City, a non-secure halfway house facility, just a week prior to the shooting. As King walked out of the facility the night before, he allegedly told his housemates, “I’m out of here.”

It’s also believed that earlier in the day before the incident involving Marion, King was responsible for an attempted kidnapping and robbery involving a mother and her young child.

Apparently King approached the woman while she was buckling her child’s seat belt and he demanded that she hand over cash, valuables and her car. The woman believed that King was armed with a gun, but rather than backing down, she attempted to grab the weapon from him. At that point, she realized that it wasn’t a gun. King then proceeded to assault her before fleeing.

As is standard procedure, Marion has been placed on administrative leave, pending the outcome of the investigation. However, no charges have been filed against him, and he will likely be protected under the state’s Castle Doctrine and self-defense laws.

“People do have the right to defend themselves,” Capt. Dexter Nelson of the Oklahoma City Police Department stated. “It doesn’t matter if this was a trooper, or an off-duty police officer. Had it been just your average citizen, they could have done the same thing defending themselves.”

However, some area residents are left wondering how a dangerous two-time convicted felon was able to just simply walk out of a halfway house and onto the streets in the first place, a question that hasn’t really been answered.

In fact, the Department of Corrections stated that they have no intentions of changing their policies or procedures, even in light of the incident with King.