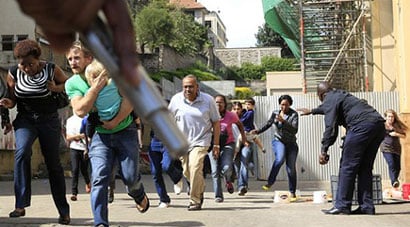 The organization’s seminars have been branded as “the fire drill of the 21st century.” (Photo credit: Move2Safety)

A group of former Navy SEALS have banded together to form an organization aimed at helping civilians to learn how to best respond to an active shooter situation in the minutes before first responders arrive. The group spent the anniversary of the Newtown shooting last month in Los Angeles and provided their “foundation” seminar to a group of 50 people.

Move2Safety was formed in 2008 as a way to better help civilians learn to protect themselves in an event of a mass shooting, something that has become a much talked about topic.

“It kinda feels like the world has become a global battlefield,” Move2Safety President Rorke Denver said. “Our background is in Special Forces and as Navy Seals, we train for the possible worst case scenario,”

Denver added in a press release. “We want to use our training to give people the basic survival tactics made necessary by the growing number of shooter-related tragedies. Similar to how people automatically respond to a fire or fire drill, our goal is to establish a protocol for active shooter emergencies. Unfortunately, mass shootings are increasing and people need to know how to react and move to safety.”

But even in what appears to be dark times, Denver assured that there are simple ways to exponentially increase one’s chance of survival in such a situation. He believes that one of the best ways to stay protected is to simply be informed.

According to the website, their “classes address a difficult subject in an empowering and engaging manner. You leave with the skills to save lives, especially your own. You become your own first responder.”

Denver explains that the average active shooter scenario lasts for about 12 minutes, but the average time it takes for a first responder to arrive at the scene is about 15 to 18 minutes. Move2Safety Founder and CEO Matthew Maasdam admits that “12 minutes is a long time to survive,” and Denver states that in those precious minutes, “You’re your own first responder. You’re your own best chance of surviving that moment.”

However, Maasdam also points out that learning to be your own first responder doesn’t mean you become the Hollywood version of Jason Bourne or James Bond. Instead, there are simple, yet effective ways to increase your chance of survival. For example, Denver explains that a criminal shooting at a target from a mere 6- to 9-feet away will miss 96 percent of the time when that target is moving. As a result, your chances of survival go through the roof when one simply gets up and moves.

Yet as simple as that may seem, for most, it’s easier said than done. When faced with a traumatic situation, such as a shooting, people will respond with either a fight, flight or freeze response, and the majority of people will simply freeze, which increases their chance of becoming a target in an active shooter scenario.

And the seminars aren’t just aimed at larger crowds like schools either. The organization makes the seminars available to companies as well as individuals and the training provided can be applied to work, school, places of worship, shopping, restaurants and everything in between.

The three-hour seminars, which are conducted by the former Navy SEALS themselves, are presented in two different levels: The foundational level aimed at teaching you to save yourself and the guard level which focuses on helping others to safety.