Guns confiscated by TSA range from vintage collectables like the old Smith J frame .38 at the bottom to ultra-modern rarities like the FN 5.7 pistol at the top left of this collage. (Photo Credit: TSA)

According to information compiled by the TSA, the agency in charge of transportation security, encountered over 1,800 guns in 2013, an increase of some 20 percent from the previous year.

In their data, more than 207 airports in the U.S. during 2013 had at least a single gun found. Of these Atlanta topped the list with over 110 guns found, a rate of about two guns a week. Following Atlanta was Dallas-Fort Worth and Houston’s Bush Airport.

According to the data, no less than 84 percent of the guns confiscated by TSA during 2013 were found loaded. However only a third of those found in this condition had a round chambered. This shows that so-called ‘Condition 3’ carry among travelers to be rather common. 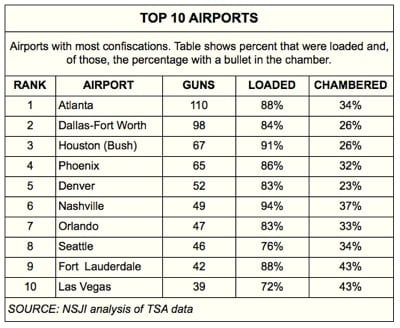 Overall, almost five guns were confiscated by TSA on a daily basis across the country in 2013. Atlanta, DFW and Houston topped the list. (Photo credit: National Security Zone)

The TSA is responsible for providing security at over 450 airports nationwide. According to the agency’s website, it employs some 50,000 Transportation Screening Officers to clear 1.8 million passengers each day.

To put those figures in perspective, about one in every 365,000 passengers is found in possession of an undeclared firearm by the agency.

Possibly a testament to the ever-increasing number of small framed .380s hitting the market (Glock 42 ring a bell?), by far the largest caliber of gun confiscated was in this chambering.

No less than 520 of these, some 28 percent diminutive, typically blow-back weapons were found by TSA in 2013. The runner up caliber, with some 337 guns found, was 9mm. 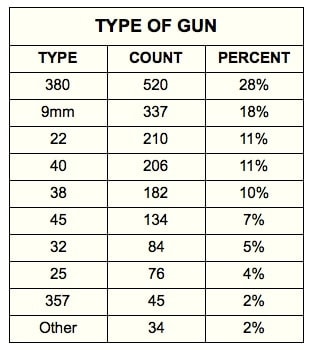 For those curious as to the “other’ guns, according to the spreadsheet compiled by National Security Zone, these included nine guns chambered in .44 (no mention of special or magnum), a single 327, and three loaded .410 revolvers found at three different locations.

Also seized by the TSA was a loaded 10mm Auto at Fairbanks International in Alaska (bears?), a single unloaded 12 gauge at DFW, a loaded 5.7mm FN at Atlanta Hartsfield, a ‘musket’ at Orlando and two different 6.35mm pistols (both unloaded) found at Atlanta and Pensacola respectively.

Of course, these last two are most likely European made .25 ACP pistols marked in metric measures rather than in calibers.

Last month TSA confiscated a 2-inch replica gun from a pistol-packing sock monkey attempting to board a plane in Redmond, Washington. The toy gun, taken from an individual known as “Rooster Monkburn,” is not believed included in the survey.

The replica would have been classified as some of the estimated 750,000 other contraband items taken up by the agency every year that range from bowling balls to snow globes.

The items confiscated are thrown out, given to police, donated, or sold at auction.