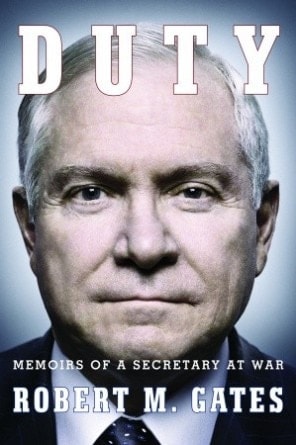 Gates new book is harsh on the Admisintraion he worked for. (Photo Credit : Knopf)

Robert Gates was the man behind the scenes of the War on Terror for four and a half years , serving his country as the head of the U.S. Department of Defense.

He was in charge 24 hours a day, 365 days a year, of the most capable military machine on the planet and all of it during a series of high-intensity, asymmetrical wars across the planet. Now, free from this burden, he has written a 600-page memoir, which has the White House on the defensive.

The Gates Pentagon was unique in many ways. He served two presidents (Bush and Obama) seamlessly, although they had wildly different political opinions. In an act similar to the canning of General George McArthur during the Korean War, he fired Gen. David McKiernan, the top U.S. commander in Afghanistan for being unsuitable. When scandals emerged at Walter Reed military hospital, Gates canned both the Secretary of the Army and the U.S. Army Surgeon General.

The wars that Gates ran were fought by the largest mobilization of U.S. National Guard and Reserves seen in 50 years. This placed the war in every small town across the country that had a local armory.

Gates, a former Eagle Scout and holder of a Ph.D. in Russian and Soviet history, went on to become an Air Force officer and CIA man. He rose to head of the agency, becoming the first career officer in the CIA’s history to rise from entry-level employee to Director. After leaving the CIA, he became the 22nd President of Texas A&M. In 2006, he replaced Donald Rumsfeld in the Bush administration and became the 22nd Secretary of Defense. 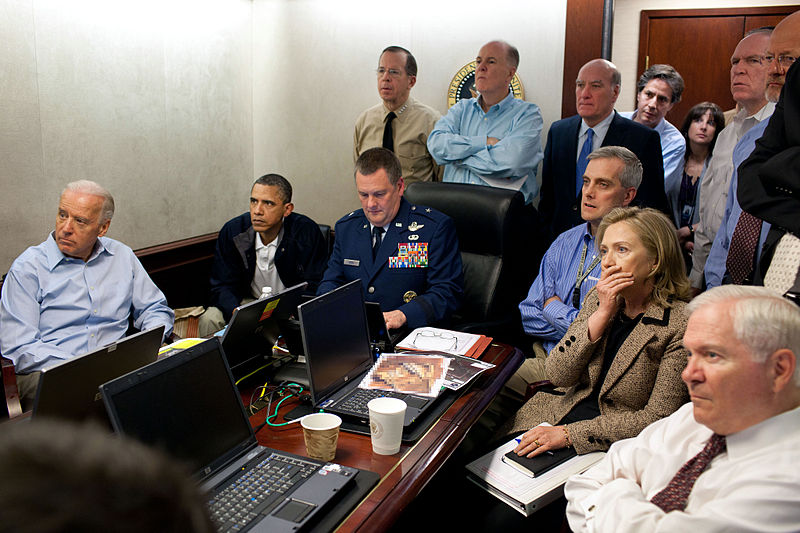 Gates in the Situation Room during Operation Neptune’s Spear, the Bin Laden raid. He is seated at the front right by Hillary Clinton. (Photo credit :Wikipedia)

When President Obama took office in 2008, he was the first SECDEF in history to be retained by the incoming president of a different political party. He officially retired from the position in 2011 and was awarded the Presidential Medal of Freedom by President Obama for his service. Now he has a new book out entitled “Duty: Memoirs of a Secretary at War,” and he isn’t pulling any punches.

In a book excerpt published in the Washington Post, Gates hits hard at Vice President Joe Biden. “I think he has been wrong on nearly every major foreign policy and national security issue over the past four decades,” Gates writes. He accuses the vice president of poisoning Obama’s relationship with his generals: “I thought Biden was subjecting Obama to Chinese water torture, every day saying, ‘the military can’t be trusted.’ ”

The words he had for the President were almost as harsh. After a meeting between President Obama and senior leadership in Afghanistan, Gates recalled “As I sat there I thought: The president doesn’t trust his commander, can’t stand Karzai, doesn’t believe in his own strategy, and doesn’t consider the war to be his. For him, it’s all about getting out.”

Still, he states in the book that “I never doubted Obama’s support for the troops, only his support for their mission.” Further, he applauds the President’s decision to stand behind the troop surge in Afghanistan even though it was unpopular. 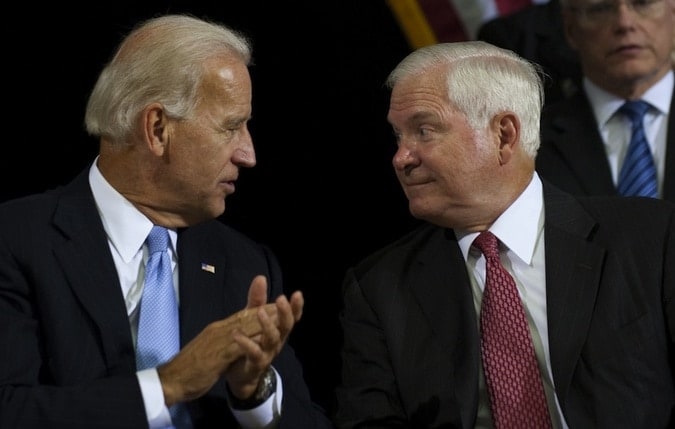 Biden and Gates may not be speaking as much these days as in this file photo. (Photo credit: The Atlantic)

In its defense, the White House released a statement last night that starts by thanking Gates for his “lifetime of service to our country.” Then moves to defend Biden stating, “… from his leadership on the Balkans in the Senate, to his efforts to end the war in Iraq, Joe Biden has been one of the leading statesmen of his time, and has helped advance America’s leadership in the world. President Obama relies on his good counsel every day.”

Besides the White House, Gates also speaks candidly about the ineffectiveness of Congress, noting that the new legislatures in Iraq and Afghanistan were ironically held to a higher standard. In another excerpt from Duty published by the Wall Street Journal Gates wrote,

“All too often during my 4½ years as secretary of defense, when I found myself sitting yet again at that witness table at yet another congressional hearing, I was tempted to stand up, slam the briefing book shut and quit on the spot. The exit lines were on the tip of my tongue: I may be the secretary of defense, but I am also an American citizen, and there is no son of a bitch in the world who can talk to me like that. I quit. Find somebody else. It was, I am confident, a fantasy widely shared throughout the executive branch.”

Nevertheless, Gates did not quit. He did his duty.

His new book “Duty: Memoirs of a Secretary at War,” is set for release this month.