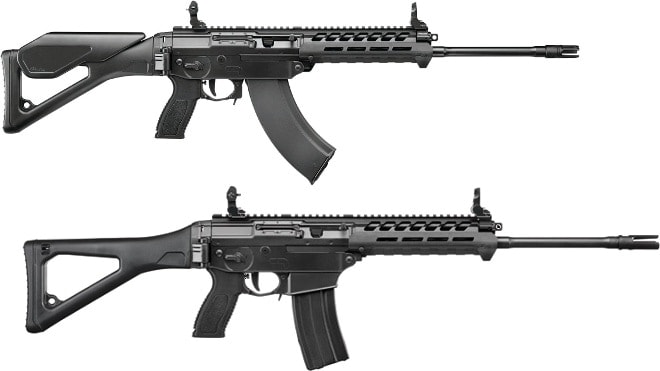 SIG Addict has uncovered some very compelling photos of what may be the new SIG 556 rifles. If these turn out to be real, then the SIG 556 series is about to see some serious changes; to the point where SIG Sauer may replace all of their current SIG 556 models with the new design. And these photos are very convincing.

It looks like SIG is planning at least three new rifles and one new pistol based on new pattern, which is being called the SIG 556xi.

The 556xi uses either an  AR-15 or an AK-47 magazines, depending on the caliber. They have ambidextrous controls and a reversible charging handle.

Along with the modular design the new 556xi models feature a new-style handguard with a full-length top rail. The gas block is railed as well for use with Picatinny iron sights. The new models will come with minimalist flip-up backup sights. They also have a new type of flash hider. 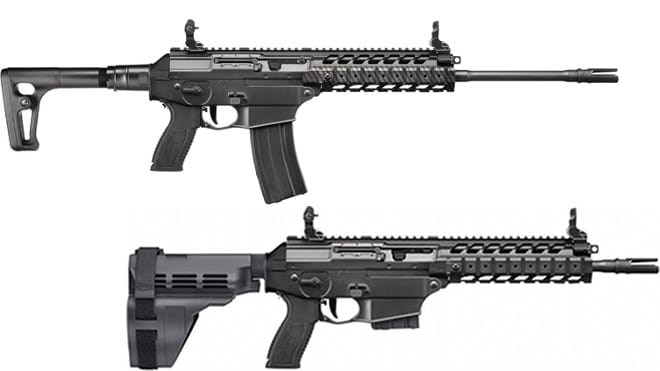 The base model is the 556xi, with a standard handguard and side-folding stock. The stock has a removable cheek riser for use with AR-15 height sights combined with the high flattop receiver. It is chambered for 5.56 and .223. The 556xi Russian is exactly the same only chambered for 7.62x39mm.

The Carbon model has two weight-saving changes, including a skeleton stock and a carbon-fiber quad-rail handguard, where the pistol has a 10-inch barrel and comes with SIG’s new arm brace. The pistol also comes with a quad rail handguard. Both are chambered for 5.56 and .223.

Of course, we won’t know anything about these changes for sure until next week. And we can’t wait.