Ruger is launching a new model GP100 for competition and target shooting called the Match Champion. It’s a six-shot service-size .357 Magnum revolver, making it a solid all-purpose revolver, too.

Inspired by the now-vintage Ruger Security Six family of revolvers, the Match Champion has a half-length underlug in addition to a handful of competition-minded features that make lighter and faster than the original GP100 design.

This follows on the heels of the announcement of new 9mm competition revolvers from Smith & Wesson. While those guns are tailor-made for USPSA with input from champion shooter Jerry Miculek, the Match Champion is ideal for IDPA and other service revolver competitions.

It is a classic-looking six shooter with a thin, Hogue stippled wood grip that’s been trimmed at the top for use with speed loaders. It comes with a match-grade trigger and modern Novak sights. The front sight is equipped with a fiber-optic insert for fast acquisition.

The Match Champion has a radiused cylinder for smooth holstering and a slab-sided barrel to reduce weight. The muzzle crown is also recessed for added protection. The barrel measures in at 4.2 inches long, which happens to be the maximum length for IDPA and the minimum length for export to Canada. It’s clear that there will be a solid market for the Match Champion.

One partcular feature sets the Match Champion apart from most Ruger revolvers and factory revolvers in general. This revolver comes with a tuned, lightened trigger that promises a sub-four-pound single-action trigger and sub-seven-pound double-action trigger.

Measuring in at 9.5 inches long, five inches tall and weighing in at just a hair shy of 38 ounces unloaded, this GP100 is going to make a lot of friends when it hits the streets. Ruger has set the MSRP at $899, which is on par with many of their special-edition handguns. Real-world prices are likely to be in the $750 range, give or take. 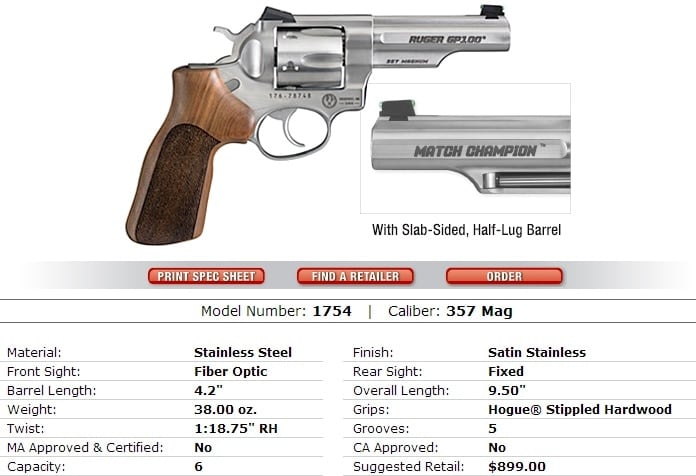 Jeff Quinn got a first look at the newest GP100 and naturally, had good things to say.

“With the creation of this new GP100 Match Champion, Ruger has built my favorite .357 Magnum double-action revolver. It is smooth, accurate, reliable, tough, and sized just right. They paid attention to the details, and got the details right. Like all Ruger firearms, the GP100 is built right, and built in the USA.”

While Quinn likes just about every gun, to say that this revolver is his favorite is no light endorsement.

If you were hunting around for a Security Six or its derivatives in a service-size package, put the Match Champion model GP100 on your short list. This is a fantastic all-’round revolver, whether or not you intend to take it to any gun games.

For more details head over to the Match Champion product page.