After failing to gain traction in 2013, HB49/SB448, known as the so-called ‘Warning Shot Bill’ has been confirmed by justice committees in both chambers of Florida’s legislature.

The pending bill, crafted by a Republican lawmaker from Polk City after a South Florida mother was sentenced to a 20-year mandatory sentence in 2012 for firing a handgun during a domestic dispute, would make it legal in the state to fire warning shots in self-defense.

Several unlikely supporters are backing the bill including the Florida Public Defender Association. In a statement to the Florida Times-Union, Stacy Scott, the Gainesville-based public defender for the 8th Judicial Circuit explained, “We see, routinely, clients that we believe shouldn’t be prosecuted because they did act in lawful self-defense. We’re fighting those cases in court every day.”

The state’s prosecutors, on the other hand, do not have such a warm feeling for the bill. In the same FTU article, State Attorney Bill Cervone of the 8th Judicial Circuit said many prosecutors already take a dim view of changes to Florida’s self-defense laws since 2005, when “Stand Your Ground” was passed.

“Collectively, I think we are greatly concerned about scenarios where there could be a miscarriage of justice,” he said. “We’re more concerned about guilty people who hide behind [‘stand your ground’]. The defense bar has equal concerns about the other side of the coin.” 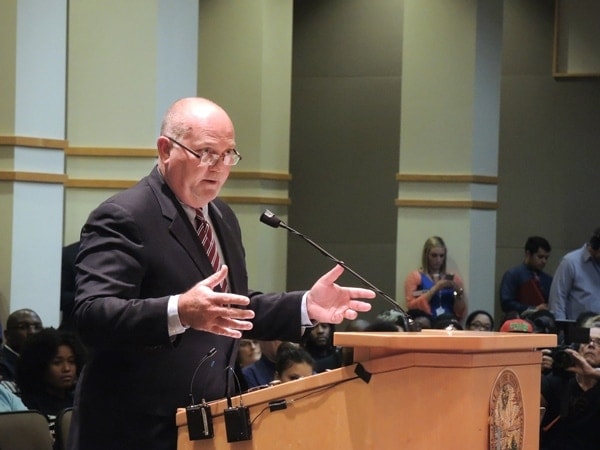 Pro-Second amendment groups in the Sunshine State back this piece of pending legislation. In a statement for WCTV, Eric Friday, of Florida Carry said, “Something is wrong and something needs to be fixed and we think this bill does that.”

Also in the same piece, Marion Hammer, past NRA President and executive director of Unified Sportsmen of Florida, said, “Threatening to use deadly force to stop a violent attack is not aggregated [sic] assault, it is self-defense. Self defense is not a crime.”

Florida House Bill 89 introduced into the 2014 Session is a 7-page clarification (pdf) to the State’s use of force laws.

In its preamble, it adjusts the act of self-defense to cover “that the defensive display of a weapon or firearm, including the discharge of a firearm for the purpose of a warning shot, does not constitute the use of deadly force; providing immunity from prosecution for persons acting in defense of life, home, and property from violent attack or the threat of violent attack through certain displays of or uses of force.”

It passed the House Criminal Justice Committee with a 12-1 vote and moved on to the State Senate as SB448. The NRA backed this measure, sending emails through its ILA network to contact legislators to support it.

The roots of this bill go back to a Florida woman named Marissa Alexander. During an August 2010 domestic dispute with her estranged husband, Rico Gray. After Gray reportedly refused to leave her residence and allegedly told Alexander, “If I can’t have you, nobody going to have you,” she produced a legally owned handgun and fired a shot into the air.

For this, she was convicted after a jury trial in May 2012. Her defense team attempted to use the Stand Your Ground defense but the State’s prosecutor was able to argue that, “there is insufficient evidence that the Defendant reasonably believed deadly force was needed to prevent death or great bodily harm to herself.”

Follwing a 15-minute deliberation, the 31-year old mother was convicted and sentenced under Florida’s “10-20-life” law to a mandatory minimum of twenty years in the state department of corrections.

After an outpouring of support on social media and attention in the press, Alexander was released on bond after serving 21-months of her sentence, now overturned . She is currently free waiting her retrial although the state is trying to revoke her bond.

On Wednesday, The Senate Criminal Justice Committee unanimously passed SB448 by committee. According to the Orlando Sentinel, the committee even proposed adding an amendment to the bill to expunge the records of those already convicted of such a crime covered under the pending bill.

That could make people such as Marissa Alexander very happy.