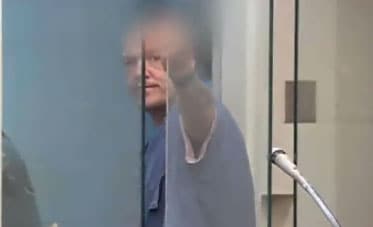 Joshua McCoy didn’t have anything to say, but was quick to flip off the cameras. (Photo credit: KGW)

A would-be robber got quite a surprise when he kicked in the door of a Portland home Monday evening. Instead of getting the cash he was after, he got pushed down a flight of stairs and knocked out, after his shotgun was snatched away by his would-be victim.

Twenty-year-old Devin Vaughn told reporters that his family was eating dinner when 38-year-old Joshua McCoy kicked in the front door.

Vaughn had taken his food upstairs to his bedroom, but suddenly heard his mother crying and screaming. When he emerged from his room to see what the matter was, he was met on the staircase by McCoy, who was armed with a shotgun, and that’s when things went bad – for McCoy, that is.

Vaughn said that McCoy was demanding cash and adamantly repeating, “Give me the money. Where’s all the money at?”

In a subtle, quick and courageous move, and with the shotgun pointed directly at his face, Vaughn threw his arms up in the air as he proclaimed to McCoy that he didn’t know what money he was talking about. But as he threw his arms up, he also grabbed the shotgun and pushed McCoy down the stairs.

“It was just instinct,” Vaughn recalled. “I grabbed it and hit him at the same time, then we kind of both fell, tripping down the stairs… He fell flat. He didn’t stumble or anything. It was just flat back and he just hit his head. I’m kind of grabbing the gun and thinking we’re still fighting and I look back and he’s just passed out.”

And when McCoy awakened, he found his would-be victims standing over him and still not ready to back down.

“He tried to get up again, so we kind of fought again. After I knocked him in the head a good time he just sat there and was like, ‘Okay, I’m done,’” Vaughn said.

When police arrived a short time later, a bruised and bloodied McCoy was taken to a local hospital where he received medical treatment, including several stitches. Once released from the hospital, McCoy was taken to jail where he now faces charges for first and second degree robbery and first degree burglary.

Police are unsure why McCoy targeted the home, but Vaughn has a theory of his own.

Apparently he had recently sold a car on Craigslist for $2,000 and Vaughn believes that McCoy was somehow associated with the person who bought the car. He feels that’s why McCoy was so adamant about Vaughn having cash.

Vaughn did not appear to be injured during the ordeal.

“I think he thought I was just a young boy that was going to give him my money or something cause I see a shotgun in my face, but that’s not even how it is,” Vaughn said, adding that it was the cries of his mother that fueled his adrenaline and the instinct to fight back.