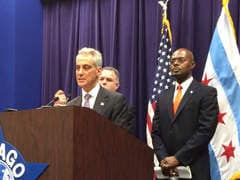 U.S. District Judge Edmond Chang gave city lawyers until January 13 to file a request for a stay of ruling, but Chicago Mayor Rahm Emanuel seemed ready to take no such action at a press conference Thursday. (Photo credit: Chicago Sun-Times)

In the latest saga of the Windy City’s epic battle surrounding guns, gun rights and gun violence, Mayor Rahm Emanuel is asking that the city give him six months to come up with rules and regulations for gun dealers after a federal court ruling on Monday determined that Chicago’s blanket ban on gun sales was unconstitutional.

“Though I fully disagree, the city has little option but to follow the ruling of the court,” Emanuel stated in a press release Thursday. “I’ve instructed the Law Department to work with public safety experts and community leaders to create a comprehensive set of restrictions on the sale of firearms to ensure that illegal guns don’t find their way into the hands of criminals or straw purchasers.”

“We’re going to think about it in a way that while we have to abide by the straitjacket the court put us under. In my view that’s a straitjacket,” Emanuel stated. “But I’m going to try to do it in a way, a thoughtful way, a strategic way, that doesn’t undermine what we’re trying to do in bringing a level of safety and security to the people of the city of Chicago,” he added during a press conference.

Emanuel, as well as Chicago Police Superintendent Garry McCarthy, who was also in attendance at Thursday’s press conference, believe that by allowing gun dealers to set up shop in the city, it will only contribute to the gun violence which has plagued the city.

“More guns is not the solution to gun violence,” McCarthy said. “The greater the availability, obviously more guns will flow into the streets. And here is the thing we have to get through our heads: Gun laws of the state of Illinois facilitate the flow of illegal firearms into gangsters hands because they’re legally purchased and illegally transferred. There’s zero accountability . . . after you walk out of that gun shop legally purchasing a handgun.”

But the city failed to convince U.S. District Judge Edmond Chang that keeping gun shops out of Chicago would have a positive effect on the city’s gun violence epidemic, citing that criminals rarely use legally purchased firearms anyway.

In addition, the court determined that “whatever burdens the city hopes to impose on criminal users also falls squarely on law-abiding residents who want to exercise their Second Amendment right,” adding that the right to keep and bear arms for self-defense “must also include the right to acquire a firearm.”

And while Emanuel did not offer any real indication of what regulations he may be considering other than the “obvious” decision to keep gun shops away from schools, although grateful for him not pursuing an appeal against Chang’s decision, gun-rights advocates are still skeptical of what restrictions Emanuel may attempt to impose.

“I think he’s going to try to regulate everything so tightly that nothing can happen,” said Richard Pearson, executive director of the Illinois State Rifle Association. “I think we will continue to fight the mayor, and if we can compel the city to let these people operate their businesses in a reasonable fashion, that’s what we’ll do.”

Legislative liaison for the National Rifle Association Todd Vandermyde scoffed at Emanuel’s six-month request. “The city is becoming a little more sensical in their litigation approach, but they can figure this out a lot quicker than that,” Vandermyde said. “There are a lot of other towns that have gun shops. They seem to have figured out that it’s a retail business that fits in a retail zone.”