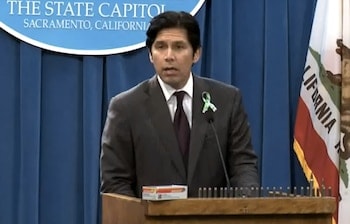 Despite the fact California Gov. Jerry Brown signed 11 gun-control bills into law last year, many Democrats in the state Legislature are not satisfied, vowing to renew the push for tougher gun laws in 2014, including a bill that would require background checks for ammunition purchases.

Under Senate Bill 53, responsible gun owners would be required to submit personal information to the state, undergo a background check and pay a one-time, $50 fee before being allowed to buy ammunition. Their information would be stored in a state database controlled by the Justice Department and the individual would have to present photo ID at a gun store upon making an ammo purchase.

Additionally, gun dealers and ammo vendors would be required to obtain special permits to sell ammunition. Those gun owners or gun dealers/ammo vendors who fail to follow the law would face misdemeanor charges.

(1) Existing law requires the Attorney General to maintain records, including among other things, fingerprints, licenses to carry concealed firearms, and information from firearms dealers pertaining to firearms, for purposes of assisting in the investigation of crimes, and specified civil actions.

“Anyone can walk into any gun store, a bait and tackle store, and purchase all the ammunition they want to, no questions asked,” state Sen. Kevin de Leon (D-Los Angeles), who sponsored the bill and introduced a version of it last year, told the Washington Post.

“The ammunition is the fuel that feeds the violence,” he continued. “The gun itself, the hand gun or the long gun or the high-powered weapon is the delivery device. The gas, the fuel, is the ammunition, and no one knows who buys it.”

Currently, several cities within California already require residents to undergo background checks for ammo purchases, e.g. Sacramento. The Sacramento Police Department claims that it was able to track 349 people prohibited from owning firearms who purchased ammo in 2012. Of those, an alleged 275 were convicted felons.

In addition to requiring background checks for ammo purchases, lawmakers are hoping to expand the state’s ban on so-called ‘assault weapons.’

“Our work’s not done there,” said Senate President Pro Tem Darrell Steinberg (D-Sacramento). “We want to distinguish in this state guns that are legally owned for sport, for recreation and for self-defense and safety, versus guns and rifles that allow hundreds of bullets to be fired within seconds that can indiscriminately injure or kill people that have no use in the sport, recreation or self-defense categories.”

de Leon’s press conference introducing the bill in the wake of the mass shooting at Sandy Hook Elementary School in Newtown, Connecticut: