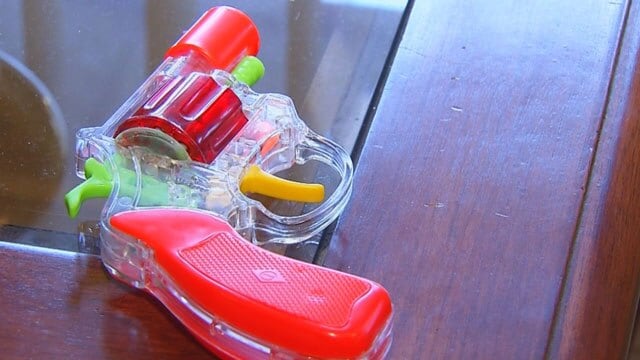 Are toy guns just as dangerous as their real counterparts? Opinions are split. (Photo credit: News 9)

An Oklahoma legislator introduced a bill last week aimed at easing punishments for schoolchildren who chew Pop Tarts into the shape of a gun, use their fingers as guns during imaginary play or otherwise violate many of the school’s strict “no tolerance” policy when it comes to weapons.

The Common Sense Zero Tolerance Act proposed by Rep. Sally Kern will no longer allow school officials to punish, humiliate, intimidate, be condescending to, or bully a student for having possession of a toy gun that is less than five inches, building a gun from toy blocks, using a figure, hand, writing instrument or other object to simulate a gun or making noises which imitate that of a gun.

In addition, the proposed bill also forbids teachers and other staff from disciplining students who chew food into the shape of a gun, wear articles of clothing that support or advance Second Amendment rights or organizations or draw or otherwise possess or produce “a firearm, military vehicle, aircraft or weapon or any object that supports Second Amendment rights or Constitutional freedoms.”

“Real intent, real threats and real weapons should always be dealt with immediately. We need to stop criminalizing children’s imagination and childhood play,” Kern stated in an interview with News 9.

Kern prepared the bill after hearing of various incidents around the country in which children were being what she perceives as unfairly punished for harmless acts.

In March of last year, a 7-year-old boy was suspended after he chewed a Pop Tart into a shape which slightly resembled a gun. The following month an 8th grade boy was suspended for wearing an NRA T-shirt to school.

In May 2013, a kindergarten boy was punished after bringing a tiny Lego gun – no bigger than the size of two quarters – on a school bus. Again that same month, another kindergarten boy was suspended for 10 days after he brought a cowboy cap gun to school. The school staff interrogated the child for more than two hours until the little boy peed in his pants.

Then back in August of 2012, a Nebraska preschool had the audacity to ask a 3-year-old deaf boy named Hunter to spell his name out letter by letter rather than using the American Sign Language sign for “Hunter” because it resembled a gun.

“If there’s no real intent, there’s no real threat, no real weapon, no real harm is occurring or going to occur, why in the world are we in a sense abusing our children like this,” said Kern, who is also a former educator.

But not everyone agrees that Kern’s proposal is such a good idea.

“With our state facing so many critical issues in public education, Oklahoma Legislators should be focusing on school funding, excessive testing and overcrowded classrooms. The focus should not be on removing a teacher’s ability to use common sense, local policies and their professional training when dealing with student discipline,” Hampton added.

Even parents are split on the controversial matter of toy guns as well.

“They’re just playing with it. I don’t see anything wrong with it at all,” said parent Myrtle Viewins. “It’s their toys. If they’re allowed to play with them at home then that’s up to the parent to control.”

But some parents believe that guns – of any kind – don’t belong in schools at all.

“We don’t allow guns in our house let alone school. Not toy guns not play guns no,” added concerned parent Tameika Gaines. “It’s a threat still, to the teachers to the other students. It can show potentially what goes on at home.”

Kern’s proposal isn’t the only of its kind either.

Last March a Maryland lawmaker introduced The Reasonable School Discipline Act of 2013, dubbed the “Toaster Pastry Gun Freedom Act.” Then in July, Texas Rep. Steve Stockman proposed a bill which aimed to “restore sanity to the schoolroom” by blocking federal funding to schools who punish children for using imaginary guns.

If Kern’s bill passes, it will go into effect July 1. Kern also attached an emergency clause to the bill.