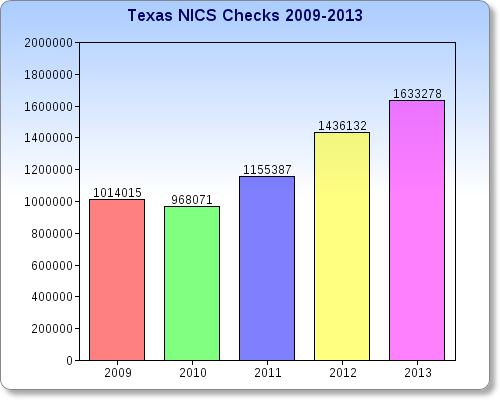 Texas has seen near steady growth in the number of NICS checks in the past five years. Chart by Chris Eger

In 2013, the Lone Star state had over 1.6 million NICS firearms background checks to purchase firearms processed by the FBI, a 14 percent increase over last year’s figures.

While this may seem unsurprising to many, it is actually the first time since 2005 that the state had more requests than any other in the Union.

This system, properly called the “National Instant Criminal Background Check System,” is maintained by the FBI and since 1998 is the ‘hotline’ that FFL holders call to clear a person to be able to buy a gun in the United States.

The numbers released in the FBI’s report is simply the number of checks performed. Since a potential buyer may not complete the sale, or on the other hand may buy multiple guns, it’s not 100% accurate as to the number of guns that were actually sold. 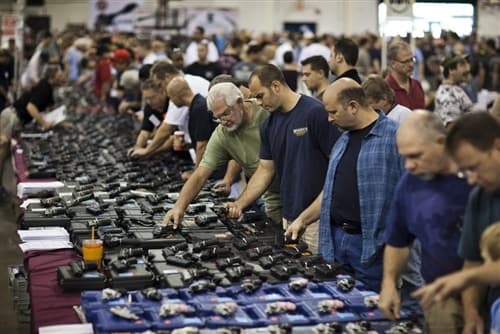 Nationwide, the NICS program recorded more than 21 million checks in 2013.

Other states, however, had much higher rates of firearms per capita. For instance, Kentucky, with a population only a sixth that of Texas, had 1,578,331 background NICS checks performed, just over 50,000 short of beating the state for the number one position.

This means that there was a check done for about one out of every three residents in the Bluegrass State. In fact, Kentucky, not Texas, was the number one state in firearms checks according to the FBIs data in four of the past six years up until 2013.

The state at the bottom of the list? Rhode Island, which had just 26,666 requests for NICS checks. With its population of just over a million, this works out to one check for every 40 residents in the nation’s smallest state.

In information held at the US Census Bureau, the current estimated population of Texas is about 26 million people. When compared to the national population of 313 million, just over 8% of the country lives in the Lone Star state. When you do the math on the number of firearms checks done last year (21,093,273) compared to the number done in Texas, it comes out to…8%.

With that in mind, Texas could be considered, like Goldilocks, to have bought just the right amount of guns last year.

Check out video from KFOX-TV