The Battle Creek police department recently released the dashcam video of the Nov. 16 officer involved shooting of a teen armed with a toy gun.

Officer Esteban Rivera responded to the Drive Thru Party Factory in Michigan on report of a man with a gun. Moments after arriving, Rivera shot 14-year-old Nicholas King in the shoulder as he reached into his waistband to remove what appeared to be a gun, Battle Creek Inquirer reports. 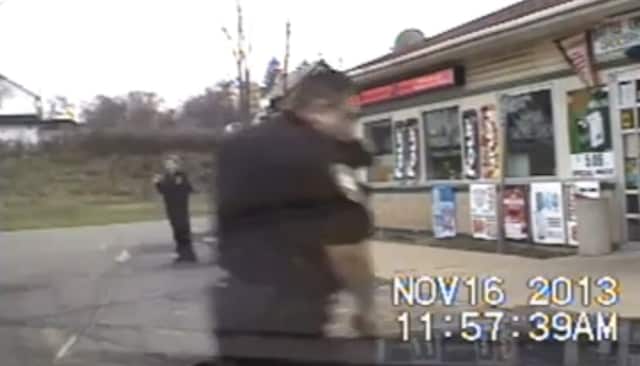 Officer Rivera shot King after he made a furtive movement towards what appeared to be a firearm.

King fled behind the store but was found nearby shortly after. It was later discovered the weapon was in fact an airsoft gun that had been painted black, according to LiveLeak.

The shooting was determined to be justified, and Calhoun County Prosecutor David Gilbert said the officer’s actions were warranted.

“He believed King had pulled the gun like he wanted to engage him in an aggressive manner,” Gilbert said.

However, after interviewing the witnesses, King’s attorney believes Rivera should not have fired, saying King threw the gun before he was shot.

According to Police One, King’s family plans to file a lawsuit against Rivera.