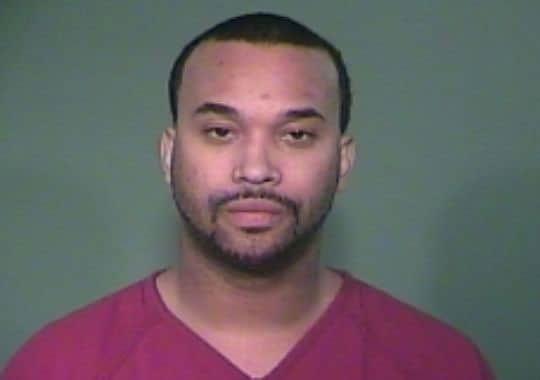 Ramond Jackson was arrested the day after the shooting when police discovered during a traffic stop that he was in possession of a Schedule II drug (hydrocodone) and driving on a suspended license. (Photo credit: Knox County Sheriff’s Office)

A 64-year-old Knoxville, Tenn. homeowner was shot Wednesday night during a confrontation with two men in their twenties, but the homeowner returned fire, fatally shooting one of the suspects.

Although only limited details of the incident have been released, local media reported that two men, 25-year-old Ramond Martez Jackson and 24-year-old Dearies Marcel George, entered the home of Terry Mack, Sr. where some type of altercation took place. During the course of the confrontation, Mack was shot multiple times. However, the homeowner shot back, struck George at least once and sent Jackson fleeing from the home.

When police arrived, George was pronounced dead. An autopsy was scheduled to be performed Thursday on George to determine the exact cause of death, although the results likely won’t be available for several weeks.

Mack was transported to a local hospital. Hospital officials last reported Mack to be in serious condition, although his injuries are believed to be non-life threatening.

Around 5 p.m. the following day, Jackson was found and arrested on charges which were unrelated to the shooting incident. Apparently Jackson was driving a white SUV which matched the description of the vehicle present during the shooting at Mack’s home and that tipped authorities off to his possible involvement.

The vehicle was towed and Jackson was arrested and charged with possession of Hydrocodone, driving on a suspended license and having no insurance. He remains in jail with a $5,500 bond, but no charges related to the shooting have yet been filed.

Authorities have not publically identified the incident as a home invasion or offered any additional details. It is unknown if Mack was acquainted with the suspects or the reason they were believed to be in his home.

The incident does remain under investigation as police continue to review evidence and conduct interviews.

No charges have been filed against Mack, who at this point is believed to have acted in self-defense.