The concept is that both the primer and the case would be stamped at the moment of firing, creating obvious confusion with reloaded ammo. (Photo credit: Calguns)

Two firearms industry groups have joined to fight the current California law that mandates microstamping new guns in an effort to prevent what many deem a “backdoor” gun ban.

This lawsuit, filed last Thursday in the State’s Superior Court, is being brought about through the combined efforts of the NSSF and SAAMI to fight the state’s 2007 law that requires new firearms sold inside the Golden State to have the capability to permanently mark shell casings fired through the gun with an identifying mark. In effect, creating a serialized shell casing that could be tracked back to the gun that fired it.

The technology to do this, according the lawsuit, is far from possible and is seen by many in the firearms industry and pro-Second Amendment group to be a fake-out to bring about a defacto ban on new guns since many would not be able to meet the new standard.

Former Gov. Arnold Schwarzenegger signed the current law in California in October 2007 becoming the first-of-its’s-kind on the books.  Law enforcement guns were however seen as an exception, which was immediately identified by gun rights activists as a huge loophole.  The District of Columbia followed in 2009 with their own version while other states including New York and Connecticut are looking at these models. In 2008 a federal bill, the National Crime Gun Identification Act, that would have required nationwide microstamping never made it past congress. 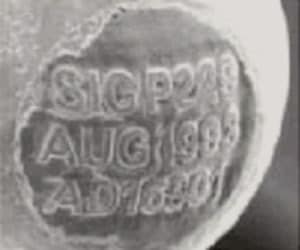 The striker head (seen here) would require modification to be able to imprint the cartridge.

The California law provided that it not go into effect until more than one manufacturer, without patent restrictions, could produce the technology, thus leaving it suspended until that unknown time.Then came State Attorney Gen. Kamala Harris stating on May 17, 2013, that such technology is now available, giving the law its teeth.

This lawsuit is being brought about by the National Shooting Sports Foundation (NSSF ) and the Sporting Arms and Ammunition Manufacturers’ Institute (SAAMI, pronounced “Sammy”). The NSSF is the firearms industry’s trade association and is made up of over 10,000 members that range from gun makers to shooting enthusiasts.

The lawsuit basically asks that the court finds the current CA Penal Code’s section on Microstamping as “invalid as a matter of law and cannot be enforced because it is impossible for a firearm manufacture to implement microstamping technology in compliance therewith,”

This is because SAAMI and NSSF contend that no semi-auto pistol’s action can be fitted with enough characters in two places to where a round can be stamped legibly when fired. 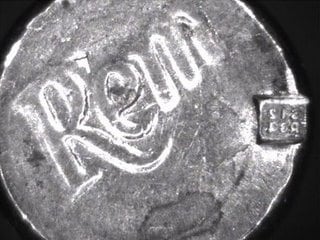 This would even apply to rimfire guns, increasing their price by at least another $200 per gun according to the industry. Photo credit: Calguns

In a statement on their website, the NSSF explained the apparent lunacy behind the California law as it stands.

“There is no existing microstamping technology that will reliably, consistently, and legibly imprint the required identifying information by a semiautomatic handgun on the ammunition it fires. The holder of the patent for this technology himself has written that there are problems with it and that further study is warranted before it is mandated.

Further, the NSSF has on its website a downloadable information sheet on the flaws in Mircostamping . These include raising the price of guns by over $200 each, to cover the cost of the as yet unproven technology.

Pro-Gun Control organizations like the CSGV support microstamping. On their website, they say that, “The technology promises to revolutionize the way law enforcement officials investigate homicides and other gun crimes.”

It looks like a judge will have to decide at this point.