Permit to hunt the endangered black rhino auctioned in U.S. for $350,000 (VIDEO)

A permit to hunt a black rhino in Namibia auctioned for $350,000 in Texas over the weekend.

The Dallas Safari Club held the auction at their annual convention on Saturday. The permit is for one post-breeding male rhino, with Namibia wildlife officials accompanying the hunter to ensure an appropriate bull is selected, Chicago Tribune reports.

All proceeds from the auction will go towards helping the Namibian government deter poachers, and according to club Executive Director Ben Carter, hunting a select few of the endangered species may actually help them prosper. 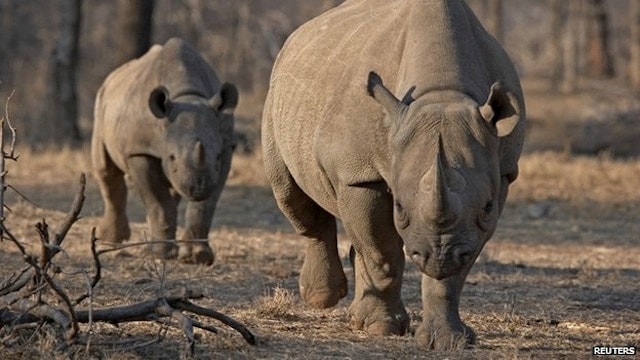 Many opposed the hunt, however, and a petition to stop the auction was signed by more than 75,000 people.

“This auction is telling the world that an American will pay anything to kill their species,” Jeffrey Flocken of the International Fund for Animal Welfare told the Associated Press.

According to Chicago Tribune, Africa is home to roughly 20,000 white rhinos and 5,000 black rhinos. While 950 rhinos were poached in South Africa in 2013 alone, Namibia suffered little, with only 10 poaching since 2006.