The pursuit began around 8:30 a.m. when the suspect, identified only as a 40-year-old male, was pulled over for talking on his cellphone while driving. As the sergeant approached the vehicle, the man sped away. Nearly an hour later, the car came to a stop and four officers opened fire, News 10 reports.

As San Diego police officers pursued the Saturn sedan, they discovered it matched the description of a vehicle used in a shooting Monday night. Other officers quickly joined the chase.

With several police vehicles in tow, the suspect slowed briefly to let a female passenger out of the car. Moments later, it came to a stop just short of a set of spike strips.

According to the officers, the suspect raised a gun at them, and that’s when they shot the man through his windshield. During the vehicle inventory, police found a gun and drugs in the car.

The suspect was transported to an area hospital where he was treated for his wounds. He was listed in critical condition. 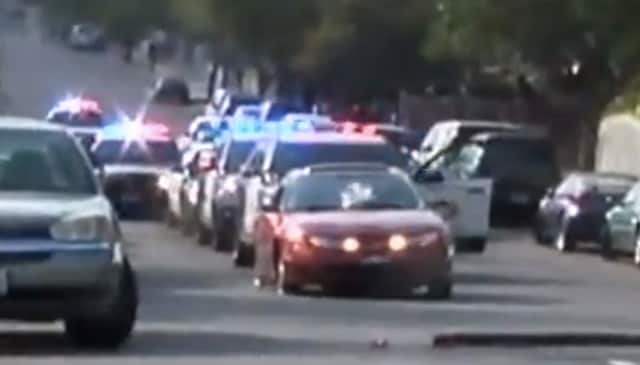 Moments after coming to a stop, officers opened fire on the armed suspect.