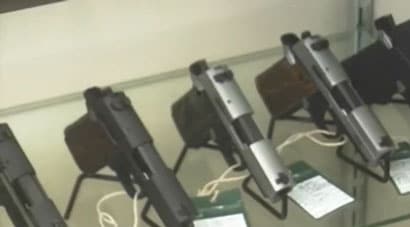 As conceal carry permit applications in Texas and across the nation continue to be on the rise, one senator has introduced a bill which would allow national reciprocity. (Photo credit: Concho Valley)

On Friday, a Texas senator introduced the Constitutional Concealed Carry Reciprocity Act of 2014  which would treat concealed carry permits similar to drivers’ licenses, allowing permit holders to legally carry a concealed firearm between states without requiring a different permit for each state.

“This bill strengthens two of our nation’s most fundamental rights, ensuring law-abiding gun owners can lawfully carry their weapons into like-minded states, while respecting the rights of states to adopt laws that are best-suited for the people of that state. This is an important affirmation of the Second Amendment and one that has been a top priority of law-abiding gun owners in Texas for some time. It is time to get this done,” Senator John Cornyn, who sponsored the bill, stated in a news release.

San Angelo Police Department Assistant Chief Jeff Fant feels that the bill is a good idea, one that would be convenient for permit holders, especially those living very close to state lines, as well as law enforcement officials.

“A standardized process might be beneficial overall, so that every law enforcement officer no matter where you go or where a citizen comes from, we’re all pretty much all on the same page,” Fant added.

Yet although the proposed legislation would allow permit holders to carry from state to state, they would still have to abide by the individual states’ laws concerning concealed carry and firearms in general. Those laws can vary tremendously, just as the requirements to obtain a concealed carry permit do.

“Just like traffic laws, it’s my responsibility to know as a driver what those laws are going to be in another state,” Fant explained.

Cornyn proposed a similar bill last year, but it failed to get the needed three fifths vote in the Senate.

“For all of us who are worried about these episodes of senseless gun violence, I think we can actually find a solution, not by encroaching on the rights of law-abiding citizens who are exercising their constitutional rights but by focusing on the areas where we can actually make a difference,” Cornyn said last April.

The proposed bill will be referred to the committee next where it will be debated on and amended if needed before any votes are cast.