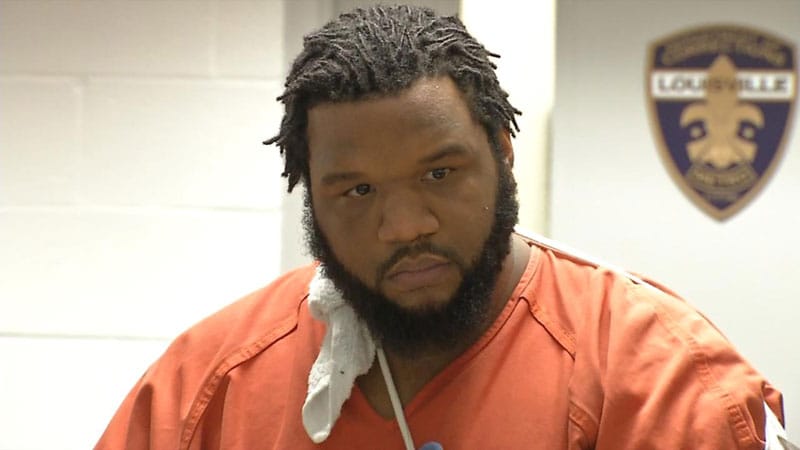 The judge seemed rather surprised when Derrick Weaver revealed that his arm was in a sling because one of his intended victims shot him. (Photo credit: WDRB)

A trio of trespassers made an attempt to burglarize a Louisville home Friday morning, but were foiled when one of the residents opened fire on the suspects, shooting one and sending the other two running.

It was about 10 a.m. when three black males kicked in the door of a home where a 20-year-old man was caring for his mother, WDRB reported.

Louisville police stated that the 20-year-old resident was able to obtain his firearm and began shooting at the three suspects, striking one at least twice. The injured suspect then drove to a nearby gas station where he claimed that he had been the victim of a robbery when he was shot.

However, when police arrived and began to put together the pieces of information given to them by the shooting “victim” as well as the details of the nearby home invasion, they quickly realized that the man was not a victim of a robbery, but a suspect in an attempted burglary.

The injured suspect, later identified as 23-year-old Derrick Weaver, was transported to a local hospital to be treated for serious but non-life threatening gunshot wounds. Once relased from medical care, he was taken to jail where he has been charged with first-degree burglary.

Authorities did not indicate that they knew the identities of the other men involved, but did confirm that they are actively searching for two additional suspects.

The 20-year-old resident and his mother were not injured during the home invasion.

The incident remains under investigation and once completed, the case will be forwarded to the Commonwealth Attorney’s Office where the facts will be reviewed and it will be determined whether the shooting was justified.

Police confirmed that there appeared to be no relationship between the victims and the suspects and at this point it appears to be a simple case of attempted burglary and subsequent shooting in self-defense.