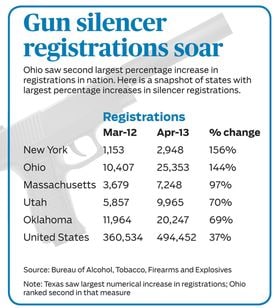 Suppressors in Ohio grew by an amazing 144% in a one year period. (Photo Credit: Dayton Daily)

As the Dayton Daily News recently pointed out, the number of legal suppressors in the Buckeye State is booming.

According to the latest figures from the Bureau of Alcohol, Tobacco, Firearms and Explosives, the number of registered suppressors in Ohio increased by 144 percent in a one-year period ending April 2013.

The growth is best illustrated by the simple fact that in March 2012, the Buckeye state had 10,407 suppressors registered with the ATF. By April 2013, this number had grown to 25, 353. Only New York saw a greater surge in numbers. Meanwhile, Texas, with more than 70,000 suppressors, has the highest overall total.

“I believe the best reason to have them is for hearing protection,” said Ryan Carr, owner of Sunbury-based RC Firearms, which sells the devices. “For this reason, hunting would be an excellent use of a silencer.”

Nationwide suppressors have become extremely popular in the past two decades as state after state legalizes the noise-reducing devices for hunting.

Of the 39 states that permit law-abiding citizens to purchase suppressors, at least 23 support the taking of game with one.  Also, in the words of a factsheet from the NSSF, “Using suppressors can make shooting firearms safer, more enjoyable and help make shooting ranges more neighborly” 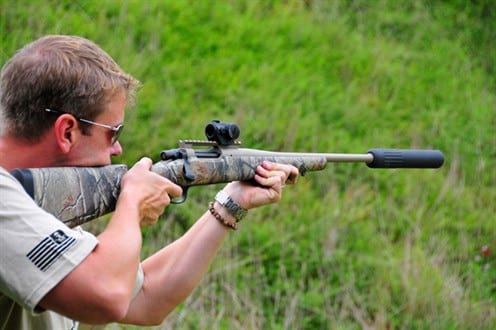 The numbers of legal suppressors have been on the rise the past fifteen years as the devices are seen as beneficial for both safety and hunting.

According to statistics on their website, the number of suppressors registered with the ATF under the NFA have risen nearly 500 percent nationwide since 1999.

Between March 2012 and April 2013, the number of legal registered suppressors increased by over 37 percent alone, bring the total number of suppressors owned in the U.S. to over 494,000, as the Wall Street Journal noted in an article last October.

Suppressors have required registration and a permit since 1934 and use of one in a ‘crime of violence’ or drug trafficking can bring a mandatory, 30-year enhanced sentence.

However, even at the time of that legislation’s creation no explanation of the inclusion of ‘gun mufflers’ and ‘silencers’ into the National Firearms Act was given other than the opinion that suppressors were thought to be used in poaching.

In a study completed by the Western Criminology Review, which examined ten years of criminal prosecutions by the federal government, on average there are just “30-40 total cases per year” of suppressors being used in connection with a crime. This is out of 75-80,000 federal criminal prosecutions each year.

These figures, which equate to much less than 1 percent, are mostly found in raids or searches that discover an illegal suppressor during a lawful search rather than a lawfully owned suppressor being used in a violent crime.

In related news, Wyoming legalized hunting with suppressors and well-known ‘can’ makers like Silencerco are moving forward with large-caliber screw-on suppressors for just this type of activity.