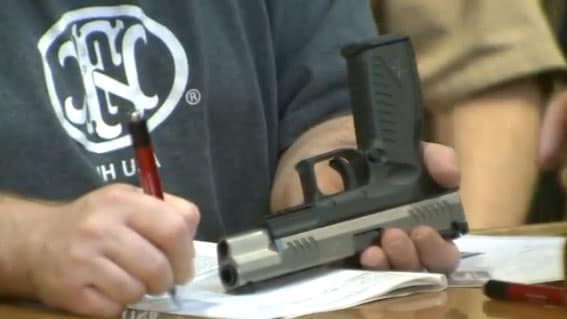 Some residents don’t like the idea of the state creating even a partial database of gun owners. (Photo credit: Fox)

Missouri State Senator Maria Chappelle-Nadal is once again pushing for legislation that would require parents of any child attending a public, private or charter school in the state to notify the school district of guns in the home.

According to SB 549, parents must “notify a school district… that he or she owns a weapon within 30 days of enrolling the child in school or becoming the owner of a weapon.”

Failure to notify the school of such weapons would result in a $100 fine. However, gun-owning parents are only required to provide their name and the name of the student and for parents with more than one child enrolled in a school district, the bill only requires one notice per family.

In addition to creating a list of gun owners, the proposal would also require parents to properly secure and store their firearms and report to law enforcement any illegal possession of a gun by a minor. Parents would also be held responsible for the unlawful actions of their children who gain control of a firearm.

The bill was filed last month.  While Chappelle-Nadal claims to be pro Second Amendment and that the bill would only be in place to protect children, some are scoffing at the idea of giving up such personal information, even though the information is seemingly limited.

“Responsible gun owners have nothing to fear from my legislation, and nobody, at least nobody in Missouri, is talking about taking anyone’s guns away,” Chappelle-Nadal stated in a release when she originally proposed the bill last January following the shooting at Sandy Hook Elementary which left 20 young school children and six educators dead. The tragedy kicked off a firestorm of gun control legislation, including Chappelle-Nadal’s bill. But the proposal went nowhere.

“I simply want to make sure that children do not have easy access to guns, especially children in urban settings. I’m not talking about farm kids who learn to hunt with a rifle or a shotgun; I’m talking about gang members turning our cities into war zones or disturbed teenagers who think the only way to settle differences is to take a gun to school. There are reasonable things we can do as a society to reduce the incidences of gun violence without infringing on anybody’s right to keep and bear arms,” she added.

Still, not everyone is convinced and the legislation, as it stands, does not include any clause for “farm kids” or long guns.

“I just know that we are not going to force Missouri families to notify a school when they purchase a firearm or let the school know that they own a firearm,” State Senator Brian Nieves said last year.

Additionally, Nieves doesn’t believe that adding similar laws to already existing – and sometimes unenforced – laws will do much to deter any type of violence.

Evan some parents aren’t convinced that the legislation would have a positive impact on communities. “I understand what they are trying to do, but making us notify them if we have guns is not going to deter the behavior that makes people do what they do with guns,” parent Kris Mills told KSDK following the original proposal last year.

If passed, the proposal would go into effect in August.