Man covered in blood breaks into Nevada home, gets shot by homeowner (VIDEO 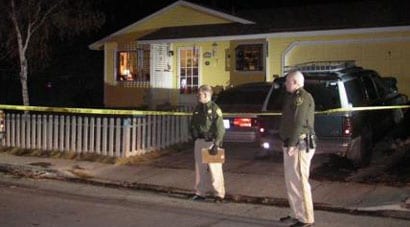 Officers had to put together the very confusing pieces of the puzzle to discover what had happened and why the intruder was already covered in blood before breaking into the home. (Photo credit: Carson Now)

A Carson City, Nevada, home was the scene of a bizarre home invasion last Thursday evening when a man who was covered in blood tried breaking into a home and was shot by a homeowner.

Apparently, the police had already been called to the area after the blood-covered man had been seen running around the neighborhood and jumping over fences. But according to local media, before officers could locate the man, he broke into a home through the back door. He was then met with the armed homeowner who opened fire during a physical altercation.

Officers who were already nearby searching for the man after receiving several phone calls of his unusual behavior heard several gunshots and raced to the home.

The suspect, later identified as Waylon Fillmore, had been shot in the leg by the homeowner and immediately fled from the home, jumping over a fence in an attempt to get away. But deputies found him a short distance from the home.

Fillmore was flown to a hospital in Renown where he was treated for non-life threatening wounds.

The homeowner and his wife were also treated at the scene by paramedics for minor injuries they sustained during the incident.

When police first arrived, they were unsure why Fillmore was initially covered in blood when he broke into the home and in fact, were not even sure if the gunshot wounds came from the homeowner’s gun or were already present when he broke in. However, authorities later concluded that the wounds were inflicted from the homeowner’s firearm and upon further investigation, they discovered that Fillmore had been involved in a physical altercation earlier at another residence where several people were arrested for charges unrelated to the home invasion or the shooting, and that’s where the initial blood on Fillmore came from.

Apparently Fillmore had already left that home before officers arrived, but his motives for breaking into the second house are still unknown. However, officers did say that Fillmore smelled heavily of alcohol when they arrived at the scene of the home invasion. In addition, the individuals at the house where the original altercation occurred were also highly intoxicated and acting aggressively according to the police, who also discovered drug paraphernalia and methamphetamine residue.

It is unknown what Fillmore’s blood alcohol level was, whether he was tested for drugs in his system or what charges he faces.

The homeowner is not expected to face any charges for shooting Fillmore.