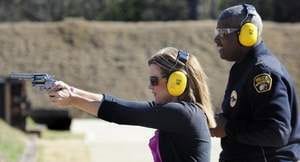 Stephen Lavender teaches Kym Klass how to safely handle a firearm during one of the monthly Firearms Familiarization Courses offered at the Montgomery Police Academy. (Photo credit: Montgomery Advertiser)

Women are arming themselves at an unprecedented rate. And although, statistically speaking, the number of female shooters is still relatively small within the gun community, the number has continued to increase over the last several years and shows no sign of letting up anytime soon.

“I think they realize in the society we live in they are not always in a group where gentlemen are around, and they are taking personal responsibility for that,” Doug Williamson, owner of The Gun Shoppe in Montgomery, Ala., told the Montgomery Advertiser last week. “These ladies have (made) the decision to be able to prepare… to take care of themselves.”

And learning to take care of themselves they are.

Lt. Stephen Lavender, training bureau commander with the Montgomery Police Academy, conducts a monthly eight-hour Firearms Familiarization Course. The course not only teaches new shooters how to properly handle a firearm, but also covers gun laws as well as the personal responsibilities that come with being a gun owner.

Lavender admits that month after month, the number of women enrolling in the course continues to rise.

“Women are coming here to learn how to use the weapon,” he said. “And what we’re able to offer is more than just the ability to shoot.”

Dennis Cotton, project manager of the Alabama Shooting Complex just north of Talladega, agrees that it’s a growing demographic. In fact, 51 percent of the 345,000 shooters located within 35 miles of the range are women.

“Women are enjoying it,” Cotton said. “They like to have the ability to protect themselves.”

While men still make up the majority of gun owners, the number of women who own firearms is at the highest it’s been since 1993. (Photo credit: Gallup)

Williamson, who has offered firearms training classes for 15 years, added that there’s also been an increase in female-only classes and that most women say they want to learn how to use guns safely and effectively.

“Since we offered specifically ladies-only courses for those who have had no previous exposure to firearms, and make sure everybody is accommodated according to their skill level, we’ve had more interest,” he said.

Billy Cates, general manager at Rocky Mountain Shooters Supply in Fort Collins, Colo. told The Daily Camera back in November that exclusively female classes often help reduce anxiety in women who might otherwise being leery of participating in such training classes.

“Many women feel like they might be unable to ask questions that they think may sound stupid in front of men who have more experience with guns,” he said.

Just as in Alabama, Cates has seen an increase in women shooters in his state of Colorado as well.

Furthermore, Lavender, Williamson and Cates all go beyond basic shooting skills in their classes and teach that gun ownership is about much more than just hitting the target.

“The way we explain all of this is that they need to understand the Alabama provision… the aggressor must have the ability to do you bodily harm,” Williamson said. “We don’t make any recommendations in how they should deal with a situation. All we can do is explain to them what the code says and what the law says about it and what the jury looks at if there is a case of self-defense.”

Similarly, Lavender focuses on three areas he feels gun owners should consider before pulling the trigger: ability, capability and jeopardy. 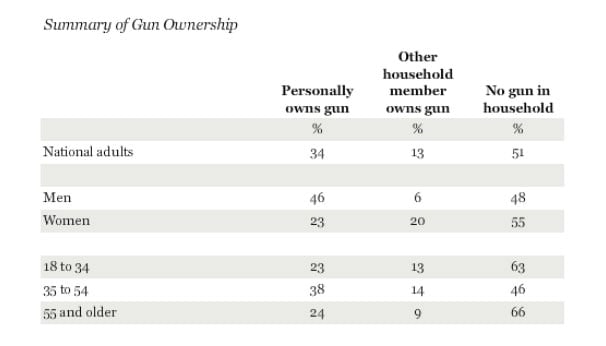 Middle-aged individuals are the largest portion of gun owners, but overall the age of gun owners is relatively evenly split. (Photo credit: Gallup)

“Does the person have the ability to cause harm, are they capable of causing harm — that depends on if they come through that barrier, like if they are in your house,” he said. “Jeopardy is the number one thing we get them to think about because jeopardy asks them to look at, ‘If I don’t do something right now, am I going to die or be seriously injured?’”

“If they can couple all this together, they are likely in the parameters of using deadly force to stop that person,” Lavender added. “We look at all sorts of things. Gender is always a key. How big is that male versus that female? I don’t have any self-defense tactics … even if I knew it, he would overcome it. In those efforts, we tell them to look at that.”

“We try to make sure we paint a clear picture with everything that has to do with being a responsible carrier,” Lavender said, adding that many of the women who participate in his course already own guns, but have never even fired a shot, leaving their firearms tucked away in a lockbox somewhere.

In addition, Lavender teaches his class to “shoot, not kill,” a tactic that Cates agrees with though many defense instructors do not.

“How many assaults are prevented without having to actually kill someone, but rather just brandishing the gun?” Cates asked.

Nonetheless, Lavender said that they work with women until they are able to comfortably and confidently hit the target.

“We want to build confidence in them,” he said.

But Lavender also reiterates that guns should never be used as a bargaining tool.

“If you pull it out, it is intended to use,” he said. “If you can’t answer the three components, don’t use it as a bluffing tool. They’ll come take it from you.”

And when asked if burglars breaking into a home will take a woman with a gun seriously, Lavender answered with an astounding yes. “More than likely they’ll run, because they didn’t come to die,” he said.