Alan Gottlieb at 2014 SHOT Show: 'Bloomberg's got money we can't compete with, that's a problem' (VIDEO) 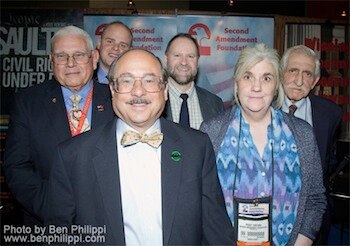 At SHOT Show 2014 there are a lot of people to see, but for me, at the the top of the list is Alan Gottlieb, the chairman of the Citizens Committee for the Right to Keep and Bear Arms and founder of the Second Amendment Foundation.

Gottlieb is a crusader for gun rights. I would argue that via his organizations, he’s done just as much, if not more, to further the Second Amendment rights of law-abiding citizens as any other gun-rights activist out there.

While SAF or CCRKBA may not get the headlines in the mainstream media that another, more high-profile gun-rights organization does, rest assured that they’re working every bit as hard to preserve and protect our freedoms.

Given that Gottlieb is on the front lines of the war over gun rights in this country, not only as a grassroots organizer but as the sponsor of many legal cases challenging unconstitutional gun laws, it’s always good to hear his assessment of the current state of affairs.

In the interview below, Gottlieb addressed a number of important topics, from the victories and defeats for gun owners in 2013 to the prospect of a federal background check bill returning in 2014 to the merger of Moms Demand Action with Bloomberg’s Mayors Against Illegal Guns to Obama’s judicial appointments, among others.

One point that stuck out to me was Gottlieb’s comment on Bloomberg’s bankroll, especially when placed in an historical context.

“There have been lots of anti-gun groups over the years, and they come and they go, they get funded to a certain level and then they peter out,” explained Gottlieb.

“The problem we face now though is Bloomberg’s got billions of dollars not millions, but billions, and he’s planning on putting billions in,” he continued. “I’m expecting him to put in as much as $12 million in 2014 between the groups his funding and the ballot measures. That’s money that we can’t compete with and that’s a problem.”

Indeed. I couldn’t agree more. It is a problem. And it’s a problem that gun owners should not simply dismiss. If we are going to win this war, we have to be keenly aware of who and what we’re up against.

As Gottlieb noted later in the interview, the way to defeat Bloomberg and to ensure that our Second Amendment rights remain intact is not only to work hard to expand the gun community, but also diversify it – reach out to more young people, women and minorities – so that everyone learns to value their right to keep and bear arms.