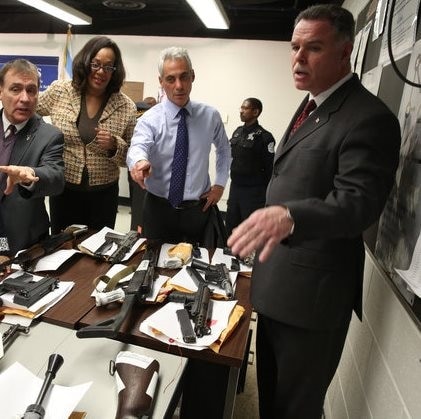 Chicago Mayor Rahm Emanuel (center) and Police Supt. Garry McCarthy (right) discuss guns. At the end of 2013 they had some 6800 extra on their hands despite the city’s ban on gun shops. (Photo credit : Chicago Tribune)

If you make guns illegal then they will disappear, right?

Well, just ask Chicago for clarification. According to information released by the Chicago Police Department, officers seized 6,816 illegal guns from the city’s streets in 2013.

In a statement from Police Supt. Garry McCarthy, “We can have the best policing in the world, but with illegal guns reaching our communities and light penalties that quickly return dangerous criminals back to the streets, we continue to fight an uphill battle.”

The year before, 7,624 guns were added to the collection.

Speaking of New York, Chicago recently dethroned Gotham as the murder capital of the nation. In 2012, Mayor Rahm Emanuel’s city saw 500 homicides while Michael Bloomberg’s New York was witness to 419. Gun sales, while strictly regulated in NYC, are nonetheless legal.

What Chicago police call ‘illegal guns’ seems to be subject to interpretation. Last September no less than 103 defendants had charges dropped against them for having an illegal firearm in their possession. This included one man who spent 14-months in Cook County jail for refusing to plead guilty for a crime he felt he did not commit. 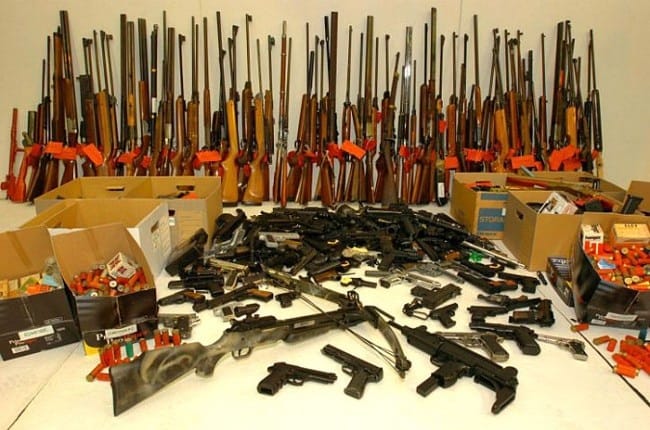 This brings the city’s total of seized illegal guns up to nearly 60,000 since 2001. This is about one for every 45 residents.

Still, those who are found to have been convicted of illegal gun possession may have to register in the City’s gun offender database. If they do not register, they may be fined up to $500 or sentenced to six months in jail.

The announcement of these nearly 7,000 guns comes on the heels of a Federal Judge shooting down the city’s ban on firearms sales as unconstitutional. That move brought outcry from the city’s government, who quickly blamed the state and federal government rather than the city.

“Every year Chicago police recover more illegal guns than officers in any city in the country, a factor of lax federal laws as well as lax laws in Illinois and surrounding states related to straw purchasing and the transfer of guns,” Roderick Drew, a spokesman for Chicago’s law department, said.

“We need stronger gun safety laws, not increased access to firearms within the city.”

The city is currently planning on taking the next six months to write new legislation to allow the legal sale of firearms inside its limits.