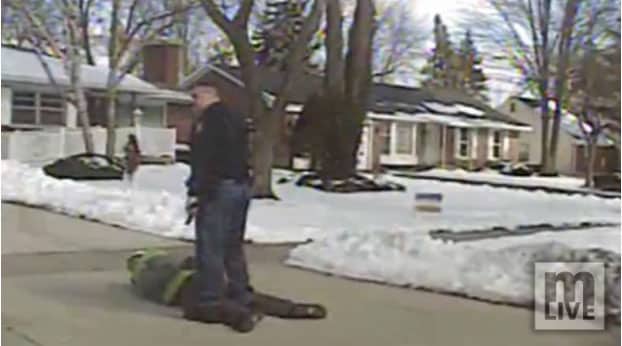 Officers handcuffed Deffert and made him lay on the ground with his face against the cold concrete while they took the time to ensure that he was not a threat. (Photo credit: M Live)

Dash cam footage recently obtained by M Live shows the 14-minute confrontation in March between Grand Rapids Police Officers and 28-year-old Johann Deffert over a legally possessed firearm. An incident which has resulted in a federal lawsuit against the city and the officers involved.

Deffert was simply taking a walk down the street on a Sunday morning after he had finished enjoying breakfast at a nearby restaurant when he was stopped and detained by police because he was openly carrying a holstered handgun, which is legal in the state of Michigan.

Officer William Moe was the first to confront Deffert after a woman called 911 to report that she had seen a man walking on the sidewalk with a gun “strapped to his leg.” The woman was surprised when the 911 operator informed her that open carry was legal in the state.

After asking several questions about what is and is not legal when it comes to carrying firearms in the state, the woman insisted that the man looked “scary” because he was wearing camo and carrying a gun.

But when the operator pressed her for additional details about the man’s appearance, she changed her tone a bit, admitting that she only thought maybe he was wearing camo pants, but was still very adamant about the gun which was strapped to his leg.

The dispatcher sent an officer out to investigate the report of a “suspicious person.”

As Moe pulled his patrol car to the area where Deffert was walking, he told the dispatcher that the man did appear to have a holstered weapon and claimed that the man was “talking to nobody.”

As Moe exited the car, with his service pistol drawn and trained on Deffert, he ordered the man to get down on the ground and put his hands up. “Do not move,” he instructed Deffert, asking, “Why do you have a handgun on you?”

Deffert remained calm, cooperative and respectful and replied, “It’s my constitutional right to defend myself.”

But apparently that answer was not sufficient for Moe, who continued to probe the man about why he would be walking down the street openly carrying a firearm and eventually said, “I gotta make sure you’re not a felon, right?” Deffert informed the officer that he actually did not have to check on that and even offered to show him the penal code.

Again, not the answer the officer wanted to hear.

Deffert continued to remain calm and respectful and repeatedly told the officers that he was not doing anything wrong or breaking any laws.

“You’re talking to yourself. You’re going down the road here with a loaded handgun. Could I just think, maybe, you might be some kind of a nut?” Moe finally said before informing Deffert that he was going to check his criminal and mental health history while they further detained him within the confines of the backseat of the patrol car.

Deffert had no history of mental health or a criminal record of any kind.

Unable to charge him with any crime because none had been committed, the officers eventually set Deffert free again.

But the 14-minute encounter ended in Deffert filing a federal lawsuit against the city, Police Chief Kevin Belk, Moe and Officer Timothy Johnston and Sgt. Steve LaBrecque, who also responded to the 911 call. Deffert claims that the officers violated his constitutional rights, assaulted him and falsely imprisoned him.

Deffert’s attorney, Stephen Dulan, says that Deffert’s act of open carrying and the subsequent lawsuit which has followed is “in part, to increase awareness that open carry is lawful in Michigan and to rally public support, therefore qualifying it as symbolic political speech,” adding that sometimes officers stop an individual simply because they are open carrying and lawsuits such as this one helps to educate both the public and the police of open carry laws.

However, the city filed to have the lawsuit dismissed on Monday and stands behind the officers’ actions, saying that their actions were “very reasonable.”