Three in custody, one on the run and one shot in the groin during a robbery gone wrong (VIDEO) 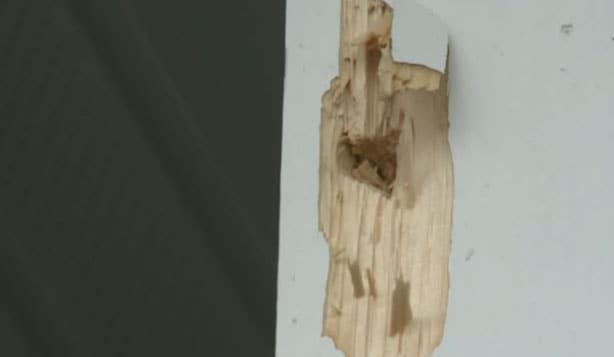 The extent of the suspect’s injuries is unknown, but this is what one of the shots did to a wall inside the home. (Photo credit: WNEP)

An attempted robbery went terribly wrong for four suspects who were involved in a home invasion in New Milford Township, Penn. Monday night.

According to local reports, 69-year-old David Braman heard a knock on the door of his rural home around 7:30 p.m. The young man outside pleaded with Braman to open the door so he could use his telephone. The man claimed that he was having car trouble, it was cold outside and he had a baby in the car.

Braman, wanting to help the young man, opened the door, but when he realized the man was wearing a ski mask, he tried to close the door back, only to be overpowered by the three young men attempting to get inside his home.

The man claiming to have car trouble, Francis Muchanic, pushed Braman to the floor and proceeded to assault him, repeatedly punching him in the face, while the other two men – Dylan Brewer and Evan Hess – began looking for cash and valuables.

However, what the young men didn’t know – and what they failed to initially notice during the struggle – was that Braman had come to the door holding a loaded .357, and while Braman lie on his back getting his face punched in, the gun was discharged three times. One of those shots struck Muchanic in the groin and sent Brewer and Hess fleeing on foot.

Muchanic’s girlfriend, Erica Major, was waiting in a car outside. Once she had realized what had happened, she helped Muchanic to the car and drove away. Minutes later, the couple called 911 for help, telling police that Muchanic had been shot when he stopped to help a disabled motorist, but it didn’t take authorities long to put the pieces together and figure out what had actually transpired. 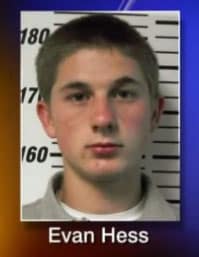 Evan Hess still remains on the loose. Anyone with any information on his whereabouts is urged to contact the Pennsylvania State Police at (570) 465-3154.

Muchanic was taken to the hospital where he remains in critical condition, the extent of his injuries unknown.

“I rushed down here and Mr. Braman was sitting on the porch, not in good shape and covered with blood,” Kostek recalled.

“The pounding that he took, he’s bruised and sore,” Kostek said. “His teeth are loose. His eye is swollen shut and he’s got bruises all over.”

Braman did not wish to speak to reporters, but according to Kostek, “He never flashed the gun, he never threatened anybody. It was only after he was lying flat on his back in the hallway here fighting for his life that the gun went off in the struggle.”

Three of the four suspects are now in police custody, all facing various charges. Twenty-year-old Evan Hess remains at large. Anyone with any information on his whereabouts is urged to contact the Pennsylvania State Police at (570) 465-3154.