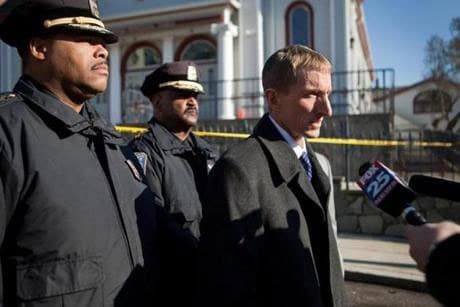 The Boston PD got a pat on the back for catching the second suspect. “It was good work by the officers getting that second suspect and being in the right spot at the right time,” said Boston Police Commissioner William Evans. (Photo credit: The Boston Globe)

An attempted home invasion in Boston’s Dorchester neighborhood Wednesday morning left one suspect dead and two men – including the resident – in police custody.

The Boston Globe reported that two masked men, at least one of which was armed, made their way into the apartment building and attempted to gain access to the man’s apartment around 9 a.m., but while trying to force their way inside, the resident, who was also armed, opened fire, striking one of the suspects.

Both suspects then fled from the apartment, but the one who had been shot only made it to the steps outside the front of the building before collapsing. He was pronounced dead when officers arrived a short time later. The name of the deceased suspect has not been released.

Police responded to a number of 911 calls from area residents who heard the gunshots and arrived within minutes. The second suspect, later identified as 18-year-old Cedrick Slayden, was found about two blocks from the apartment building running, “breathing heavily and sweating despite the cool temperature,” the police report showed.

As officers began to come near Slayden, he was seen pulling an object from his pants and tossing it into a nearby yard. Authorities later recovered a fully loaded black and silver Smith & Wesson 9mm handgun with six rounds in the magazine and one round in the chamber.

A local NBC affiliate reported that people in the area were hesitant to talk with reporters and most did not wish to appear on camera. They say the community has worked hard together in keeping crime out of the area.

Marshall Hawkins lives a few doors down from the building and said, “It’s been a lot of neighbors helping neighbors. Who’s on the street, who’s not supposed to be on the street? Letting people know, calling the police, you know just keeping your neighborhood safe.” 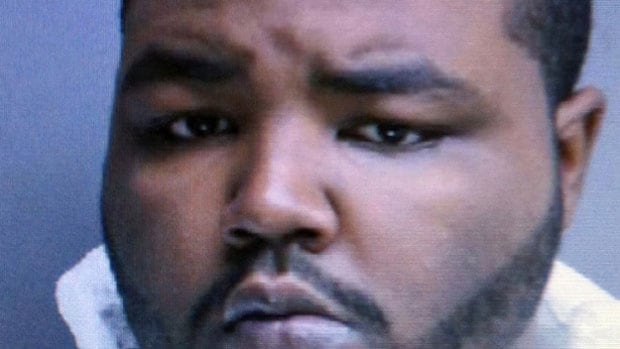 Cedrick Slayden was out on bail after a previous arrest when he attempted to break into the apartment. (Photo credit: CBS)

The woman said she works late at night and she’s never seen anything like that in the normally quiet neighborhood.

The building manager, Jose Cruz, told reporters that the residents in the 39 units are “nice people,” and the area is usually “nice and quiet.”

Slayden was taken into custody where he faces numerous charges, including unlawful possession of a firearm, illegal possession of ammunition and carrying a loaded firearm. He plead not guilty to the gun charges in a Dorchester court Thursday.

Slayden remains behind bars with a $50,000 cash bail. At the time of the home invasion, he was out on a $1,000 bail after being arrested in May for allegedly stealing a man’s iPhone. He already had pending larceny charges stemming from that incident.

The resident, whose name has not been released, was also taken into police custody. Authorities worked to determine whether or not he was in legal possession of the handgun he used to defend himself during the home invasion. It is unclear if the resident has been released or whether he will face any charges as well.

The investigation is still ongoing and police have released only limited information surrounding the incident. The motive behind the attempted break-in is unknown at this point, but it is believed that the suspects and the resident were acquainted with one another.