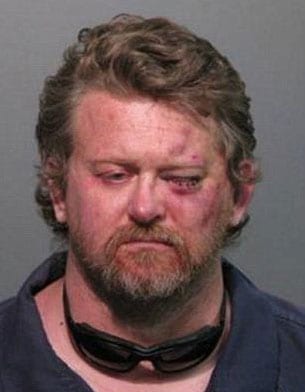 John Rogers claims he shot his friend in self-defense and was granted immunity under the controversial Stand Your Ground law in Florida. (Photo credit: Orlando Sentinel)

The murder trial of a blind Florida man was cut short last Friday when a Seminole County judge granted him immunity through the controversial Stand Your Ground law, the Orlando Sentinel reports.

John Wayne Rogers, 40, had remained in jail for nearly two years following the March 2012 incident at his rural Geneva home in which he fatally shot his friend, James T. DeWitt, 34, once in the chest with a Remington .308 rifle. Rogers claimed self-defense, but the prosecution charged him with first-degree premeditated murder, which could have resulted in life in prison for him.

Witness accounts of what happened that morning are conflicting.

DeWitt, along with his girlfriend, Christina Robertson, stayed the night at Rogers home for a night-long drinking escapade. The party lasted well into the morning hours and at around 10 a.m. the trio took a trip to the store to buy more beer. Sometime after returning to Rogers’ home, a confrontation occurred between the two men, and that’s when the details get sketchy.

According to Rogers, DeWitt had passed out after the two were involved in a scuffle, in which they both suffered minor facial injuries. Rogers woke up DeWitt and told him to leave his house. DeWitt became agitated and aggressive towards Rogers, so Rogers went to his bedroom, grabbed his gun and returned to tell DeWitt again to leave his house. But when DeWitt saw Rogers with the rifle, he charged at him and that’s when Rogers pulled the trigger, fatally striking DeWitt once in the chest.

“He felt like he had no choice but to shoot him, and he did,” said Assistant Public Defender Tim Caudill.

However, according to DeWitt’s girlfriend, the two men were only “play fighting,” something that they would sometimes do. She claims that the shooting was completely unprovoked and that Rogers just simply walked into the bedroom, retrieved his gun, came out and shot DeWitt.

Rogers, a former Marine, walks with a cane and is legally blind as the result of a work-related accident which occurred while testing a fire-suppression system in 2001. However, some of the area neighbors claim that he can in fact see.

In the initial police report, one officer stated, “I believe that the use of deadly force by Rogers was not lawful.”

Additionally, Daniel Miller, a friend of DeWitt who was there when the shooting occurred, said that he was surprised to find out that Rogers had been set free.

“Self-defense I guess he claims, on the other hand you know you can’t just take a life like that,” he said.

It is unknown how long Miller was at the home before the shooting occurred.

On Monday, jurors were selected for the murder trial and they returned on Wednesday, Thursday and Friday to hear details, evidence and arguments in the case. However, since the judge granted immunity, as it currently stands, the case won’t go to trial.

The infamous Stand Your Ground defense has been thrust under a scrutinizing spotlight since the February 2012 fatal shooting of Trayvon Martin, although George Zimmerman’s attorneys never even invoked the controversial defense.

According to attorney and former Seminole County prosecutor Donna Goerner, the Stand Your Ground defense has been increasingly used, but immunity through the law is rarely granted.

“I think judges are reluctant to grant these stand your ground motions. They want to let juries decide,” she said, adding, “There’s a lot of confusion.

But that wasn’t the case with Rogers, who had already had previous violent run-ins prior to his friend’s fatal shooting.

In an incident four years ago, after another long night of drinking, Rogers fired 15 rounds from a handgun at Michael Rogers, who is his cousin and was his roommate at the time. Michael suffered minor injuries from a fight the two were involved in earlier that night, but was not hit by the gunfire.

Rogers was charged with aggravated assault, but made a deal with prosecutors by pleading no contest to a lesser charge of unlawfully displaying a firearm. Rogers was placed on probation.

But Rogers’ probation was revoked a year later and he spent 71 days in jail for domestic violence after he pushed and punched a woman.

Chris White, chief of operations for the State Attorney’s Office in Seminole County, said his office had not yet decided if they were going to appeal Friday’s ruling.