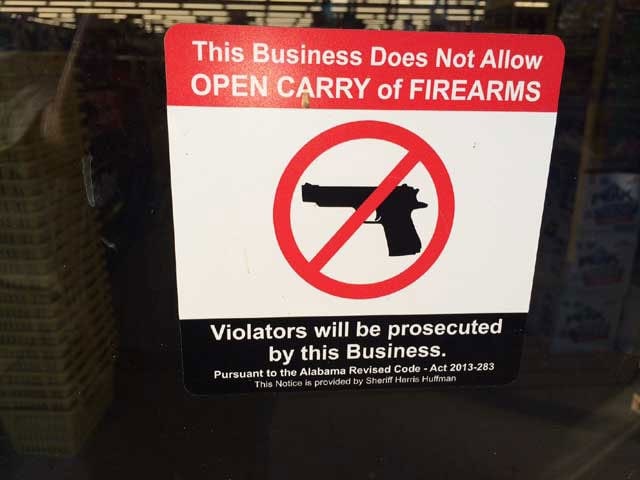 The suspect walked into the Dollar General waving a gun, ignoring the sign which prohibited him from doing so. (Photo credit: ABC)

Dallas County authorities are investigating a fatal shooting of a gunman by an armed citizen in an Orrville, Alabama, Dollar General store Thursday afternoon.

Deforest James, who was in the store just moments before the shooting occurred, told reporters that Kevin McLaughlin walked into the store waving a gun and said he was “looking for three bad motherf—ers.”

McLaughlin then ordered the cashier and a customer, Marlo Ellis, into a break room in the back of the store.

However, McLaughlin was unaware that Ellis was carrying a concealed handgun, and as Ellis walked through the doorway of the break room he pulled the gun, turned around and shot McLaughlin once in the chest. McLaughlin was pronounced dead when officers arrived.

The entire incident lasted less than five minutes and was caught on surveillance video, which has not been released to the media.

Dallas County Sheriff Harris Huffman said that at this point in the investigation McLaughlin’s motives are still unclear, but they do not believe that he intended to commit a robbery. Customers who were in the store at the time told authorities that there was never any mention of money or anything of that sort.

“I don’t know why he went in there waving a gun at the people. Whatever reason he went in there for, it was very serious. Anytime someone goes into store and points guns at people, then anybody in the store has the right to use deadly force against that person,” District Attorney Michael Jackson stated.

Ironically, the store had a sign posted on the door which prohibits open carrying of firearms into the store.

“To have a gun concealed, you need a permit. To carry it open carry, you don’t. But you have a sign in a place of business, that’s letting you know that the people inside that place of business do not want guns in there,” Huffman explained.

Authorities were checking into whether or not Ellis had a valid permit to carry concealed.

Huffman said the case would be turned over to a grand jury for review once the investigation was completed.

“You have one individual waving a gun and you have another one who shoots the one waving the gun. Some people say that’s justifiable. Then you’re going to have some who says it’s not. I think we need to get all of the information we can get from everybody and then go forward from there,” Huffman said.

But Jackson said that he did not expect Ellis would face any charges.

“In Alabama you have the right to defend yourself or a third party so when the perpetrator went in there with a gun anybody in the store had the right to deadly force and that’s what happened, so he actually was a Good Samaritan in this situation because other people could have been injured if he hadn’t taken action,” Jackson said.

Although Ellis is being called a Good Samaritan in this situation, he has had prior run-ins with the law. According to Jackson, Ellis is currently facing charges for second-degree rape and enticing a child for immoral purposes. He is accused of picking up a girl under the age of 16 from a school basketball game and taking her to his house before the two had sex.

Ellis has been out of jail on bond, but Jackson confirmed that regardless of the pending charges, Ellis was still within his rights to possess a concealed carry permit because he has not been convicted of a crime.