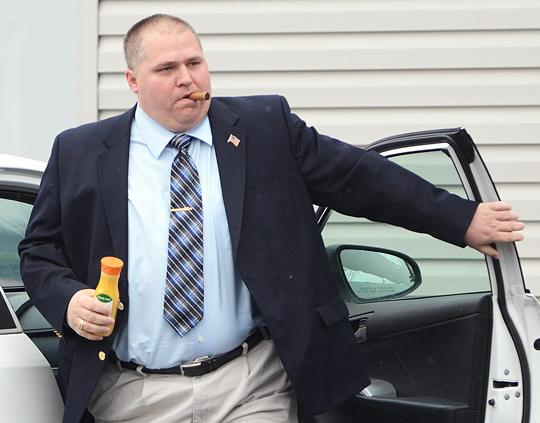 James Schiliro, a member of Mayors Against Illegal Guns, was sentenced to 10 to 20 months this week after using three handguns to illegally detain a man he had a crush on.

In February 2013, Mayor James “Jay” Schiliro of Marcus Hook, Pennsylvania, ordered a city police officer to bring a certain town resident by his home. The man, a 20-year old former neighbor, was kept there by Schiliro who “made him drink wine, and refused to let him leave for three and a half hours,” the Philadelphia Inquirer reports.

Schiliro reportedly threatened to kill himself and fired a gun into a stack of papers during the incident. Eventually, the victim, Nicholas Dorsam, was able to leave and then called police.

“That night was a culmination of feelings which had built up over 25 years,” said Schiliro. Apparently, the two men had been long acquaintances and Dorsam was on the receiving end of an unwanted attraction. The lurid details of the drunken encounter that led to gunplay and threats were well covered elsewhere in the media.

This led to the mayor’s arrest and charges of unlawful restraint, reckless endangerment, false imprisonment, official oppression and furnishing alcohol to a minor. At the time of his arrest, Delaware County District Attorney John Whelan told the press, “The mayor, I believe, has indicated to the press that he has some issues.”

Instead of resigning, Schiliro reportedly sold his firearm collection, entered treatment for alcoholism and sought re-election while he fought the charges.

Although happy to have he Republican mayor in their ranks for diversity, MAIG distanced themselves when the news broke of the Mayor’s actions. Photo Credit: MAIG

Schrilio was a member of Mayors Against Illegal Guns, a 1,000-member, non-profit lobbying group co-chaired by Michael Bloomberg and Thomas Menino to advocate gun control. Mostly composed of democrats, the Pennsylvania mayor was one of the group’s few Republicans.

However, once the criminal allegations against Schrillo surfaced, MAIG soon distanced themselves. The mayor’s membership in MAIG became something of an embarrassment for the organization and his name was quietly removed from the organization’s roster and open letters to the U.S. Senate calling for gun control.

“The allegations against Schiliro creeped me out. With associates like this, I can understand why Bloomberg doesn’t trust people with guns,” Alan Gottlieb, Executive Vice President of the Second Amendment Foundation said at the time.

Convicted in November of the charges against him, Schiliro had numerous supporters in court for his sentencing this week. In the end despite their pleas, the now-former mayor received a sentence of 10 to 20 months in prison, a $1,300 fine, and five years of probation.

The testimony from Schiliro and his family members evidently did not move Judge James F. Nilon. “I don’t think you appreciate the seriousness of the nature of the behavior that you engaged in,” Nilon said.

Emails for a statement from Mayors Against Illegal Guns from Guns.com on Schiliro were not returned.