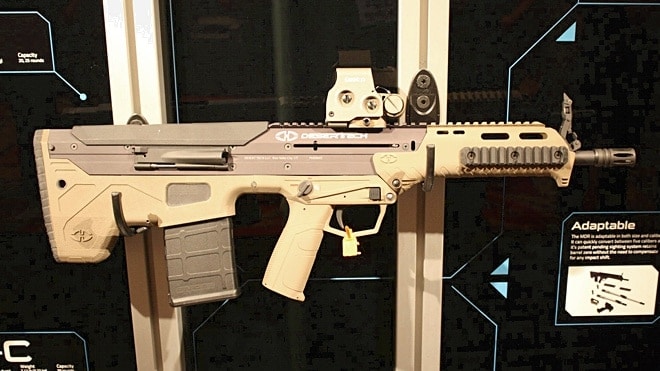 A few weeks ago not many people knew about Desert Tech, formerly Desert Tactical Arms. Primarly a manufacturer of precision long-range rifles, but now with the announcement of a new, innovative and modular bullpup rifle the shooting world can’t get enough about Desert Tech.

And with good reason. The Desert Tech MDR — Micro Dynamic Rifle — is one of the most forward-thinking rifles to hit the market in a long time, and that includes traditional rifles.

The new bullpup will be offered in two basic configurations, one chambered for 5.56 NATO and .223 Remington and the other in .308 NATO and 7.62 Winchester. But here’s the rub: they’re the same rifle.

The MDR chassis can be adapted to fire 5.56/.223, 7.62/.308, 7.62x39mm, 300 AAC Blackout and 6.8mm Remington SPC, with a barrel, bolt, handguard and magwell swap. The bullpup has been in development for five years and is just now entering its final stages of testing before it goes into mass production. The MDR, depending on the caliber, uses standard AR-15 and AR-10 magazines. We saw it loaded with PMAGs and Desert Tech said they did not find a magazine that was incompatible with their magwells.

Desert Tech is still tweaking a couple of things, like the ejection port geometry and the handguard and barrel swapping system — the guns we saw were pre-production models with rapid prototype parts — but even without being 100 percent ready for market, it’s clear that the MDR is a different breed of rifle. 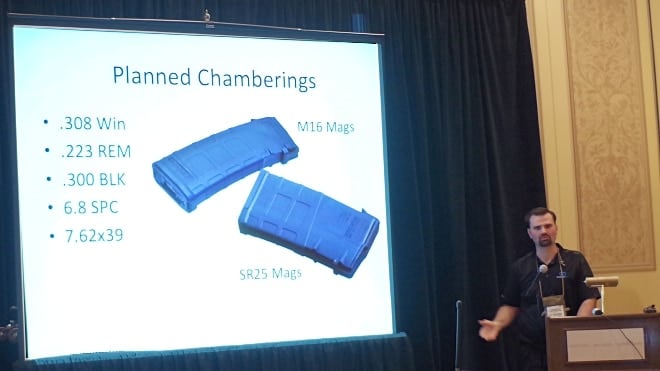 “We make what we want, and if people want to buy them that’s great,” said Desert Tech’s president Nick Young. “We like guns a little more than we’re supposed to.”

The MDR was put together from an ease of use perspective before any mechanical considerations were put into place. Desert Tech started with a clean slate, not basing their rifle on any other designs and it shows.The end result is an ambidextrous bullpup with a trigger unlike any other on the market.

Based on early feedback they’re thinking about adding a redundant spring to the trigger to bring the trigger pull up to four pounds, which is still light but more common with working guns. This will leave the user to decide to keep the trigger as-is or remove the extra spring for a more competition/target trigger feel.

Many small details were paid attention to with the development of the MDR that make it unlike other bullpups on the market. The ejection port and charging handle were designed such that it is possible to do press checks or chamber checks without difficulty and the charging handle is extended to clear any accessories, like turrets on scopes. 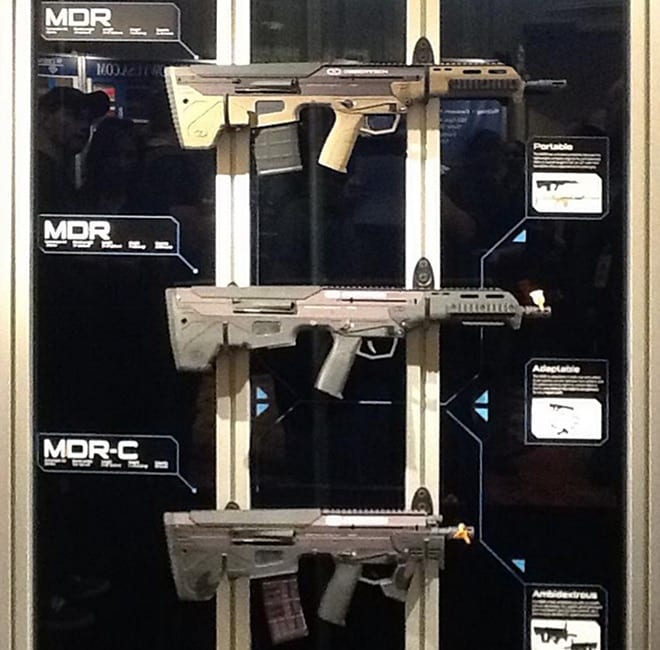 The charging handle can be swapped to either side making the gun lefty-friendly. While the body of the bullpup has cutouts on both sides, ejection happens on the right side of the rifle. This does not interfere with left-handed shooters as the ejection port spits cases out forwards, not sideways.

If the chute gets jammed or damaged it can be flipped open manually and the rifle will eject to the right like a standard bullpup. The advantage of this system, besides being lefty-friendly, is that there is no tube that could potentially channel two manually-cycled cartridges into each other, bullet tip to primer, causing the forward round to go off. However unlikely that scenario is, Desert Tech did not even want to entertain it as a possibility with their design.

We asked Young if it would be possible to build the MDR with a dedicated left-side ejection system and he said it would only require a few mirrored parts, although they have no plans to make any that at this time.

One nice touch is that the front sight block of the MDR is fixed to the barrel assemblies. This means that every barrel is sighted into itself, meaning that the user will not have to adjust their sights when switching from, for example, 5.56 to 300 BLK. The barrel assemblies are completely free-floated, too, for maximum accuracy, which is to be expected from a long-range rifle manufacturer.

And finally, the magazine release is right where you expect it: forward of the trigger where it can be manipulated with your index finger.

Desert Tech hasn’t set a hard timeline for availability but has stated that they’re essentially ready to enter mass production. Depending on the configuration MSRPs will range from $2,175 to $2,450, which is only slightly more than other bullpups and considering the features, not outrageous.

Ultimately Desert Tech wants the MDR to be one of the easiest to use, maintain and modify rifles on the market. It just also happens to be a bullpup. Lightweight at just 7.5 pounds with standard 16-inch barrels, this carbine will definitely change some opinions when it comes to bullpups.