The Marine Corps tweeted “don’t be a lone shooter” over MLK weekend, but quickly took it down after be alerted the post could be potentially offensive.

The Marine Corps tweeted “don’t be a lone shooter” over Martin Luther King Day weekend, before deleting it shortly after.

The Marine Corps Forces Special Operations Command (MARSOC) sent out the tweet Friday morning at 10:52. While it’s not uncommon for MARSOC to tweet safety tips, when they tried to remind Marines to never conduct patrols alone, the phrasing proved an ill reminder of Martin Luther King Jr.’s assassination, ThinkProgress reports. 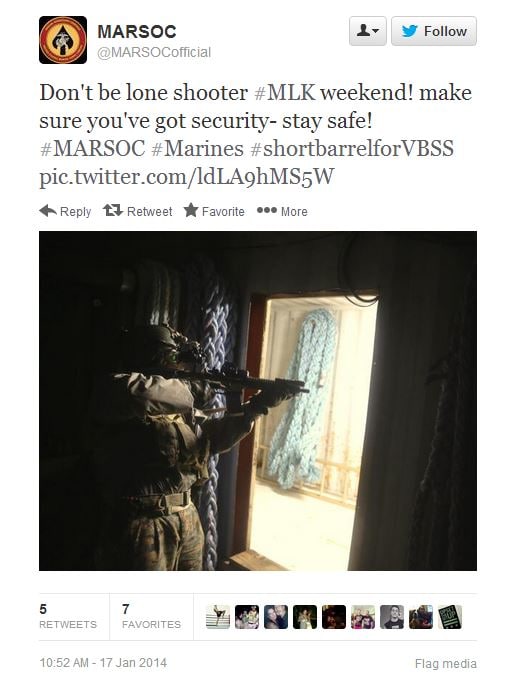 Many commented on the tweet and advised of its potentially offensive nature. The Marine Corps responded quickly and it removed the post.

“Marine leaders will frequently take the opportunity to remind their personnel to make wise decisions and look out for each other, especially before a long holiday weekend,” Capt. Barry Morris said in an email to ThinkProgres. “The intent of our recent post was to remind personnel to partner up when going out over the weekend and to look out for each other using military jargon.”

“When we were alerted to the potential that this military post could be viewed as insensitive or offensive when combined with the historical facts concerning Martin Luther King Jr., we immediately took it down and apologize for any unintended disrespect of misperceptions,” he continued.