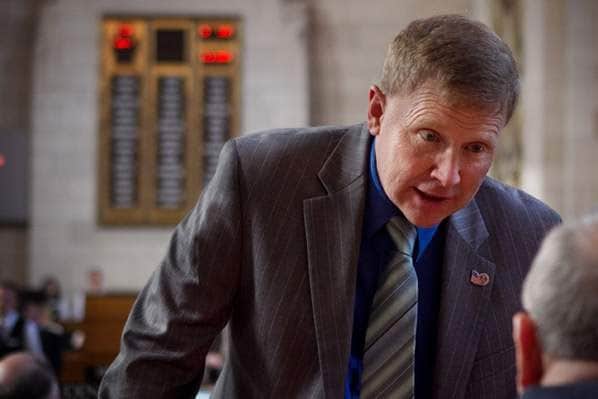 Sen. Mark Christensen proposed similar legislation in the past, but it failed to become law. (Photo credit: The World-Herald)

A bill introduced by Nebraska State Sen. Mark Christensen last Tuesday would allow teachers with additional training to obtain a special concealed-carry permit allowing them to carry guns in schools.

Legislative Bill 879 wouldn’t just allow any teacher in any school to carry a firearm. Instead, the bill would permit each individual school district to choose whether to amend their current policies to allow teachers to carry concealed on campus. Currently, state law prohibits anyone except for on-duty law enforcement from carrying a gun onto school property.

Although Christensen expects opposition from some larger, more urban districts, he feels that allowing armed staff is a good option for smaller, more rural areas where it’s not unusual for law enforcement to be half an hour or farther away. Additionally, those smaller districts don’t always have the funds to hire security guards or add other safety features that some of the bigger districts have.

“Nebraska is such a diverse state that we just can’t have one size fits all,” Christensen said.

Under the proposed legislation, which would apply to both public and private schools as well as colleges and universities, teachers who wished to carry guns on campus would have to be approved by the governing body of each individual school district and would have to obtain a “Level II” concealed carry permit.

The upgraded permit requires an extra 24 hours of tactical training in addition to the state’s current requirement of eight hours. It would include the best way to deal with active shooter scenarios and weapons retention methods, as well as techniques concerning barricading and evasion.

The names of the teachers who were approved to carry guns on campus would remain undisclosed.

Christensen stated that there are already a number of teachers who said they support the bill and will testify in favor of it if needed.

However, not everyone agrees that additional training qualifies a teacher to carry a concealed handgun in a school, or even that the whole idea of armed teachers is a good one at that, even in rural school districts with limited resources.

Columbus Public Schools Superintendent Troy Loeffelholz opposes the proposition and believes that, even in light of growing school violence, schools are still among one of the safest places for children to be, and that by introducing guns – even in the hands of law-abiding citizens – will make schools more dangerous.

Loeffelholz believes that the best way to avoid violence in schools is by focusing on relationships with the kids. He also thinks that teachers and other school staff should be “models of good behavior” which, in his opinion, means not having guns.

However, while positive adult influences in a child’s life is always a good thing, it’s not always a student who walks into a classroom full of kids and starts shooting.

And while it’s practically impossible to predict when and where such a tragedy may occur, being prepared for such a situation may help to save lives – which, according to Christensen, is what his bill is all about.

“Do we want a 30 to 40 minute response time and put kids at risk?” Christensen said.

And there are some who agree with Christensen’s point of view.

Scottsbluff School Board President Bob Kinsey admits that while his school district wouldn’t likely implement such a program in their own district because they already have resource officers, he still supports the proposed bill.

“In a rural area where law enforcement is a distance away and these types of situations, time is critical. It’s a matter of life and death sometimes. An advocate for local control, I just think it should be passed and then local school districts can decide if it’s appropriate for them or not,” he said.

Christensen proposed a similar bill back in 2009 and again in 2011 following a shooting at Millard South High School in Omaha. A 17-year-old student shot the school principal and assistant principal after he had been suspended. Police found the shooter 45 minutes later in a parking lot about a mile from the school, dead from a self-inflicted gunshot wound.

Christensen reiterated that, in his opinion, the growing violence is a people problem, not a gun problem.

“Criminals do not follow the rules,” he said. “It’s not the gun that kills anybody. You can leave a loaded gun cocked on a table all day and it’s not going to fire. It takes a human.”