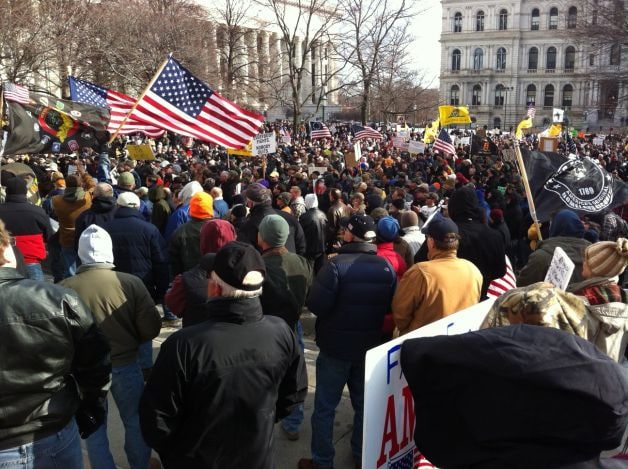 Rallies across the country last weekend brought gun rights activists together such as this one seen in Albany, NY. (Photo credit : Times Union)

Volunteer grassroots organization Gun Rights Across America mounted a campaign over the weekend to rally pro-2A gun owners and gun-rights activists in every state capitol in the country.

Last year thousands gathered all across the country in honor of Gun Appreciation Day, but this year attendance varied. In many areas, this was chalked up to poorly organized state-level chapters of the new movement.

The 2013 rallies were just weeks after the Newtown shooting and the resulting push for more new gun control laws, so passion and interest were on the pro-gun side. On some of the GRAA state chapter Facebook pages, weather and other social events were also cited for possible reasons of low attendance.

The Denver rally, in a state which has seen tough new gun laws, which in turn led to a recall of state legislators and an exodus from the area of major gun accessory company, scheduled during the Broncos playoff game. Still, by the organization’s own figures, a crowd of some 200 gun right’s activists made an afternoon appearance.

In an email to Guns.com, Shannon Montague, Vice President and National Events Coordinator for GRAA explained that the group holds public gatherings yearlong, and that, “We consider every rally and event a success. This week’s rallied drew in about 10,000 people nationwide.”

“A few states did have their rallies earlier in the week to advance key legislation…Unfortunately, tyranny doesn’t wait for warmer weather or football season to end,” Montague added.