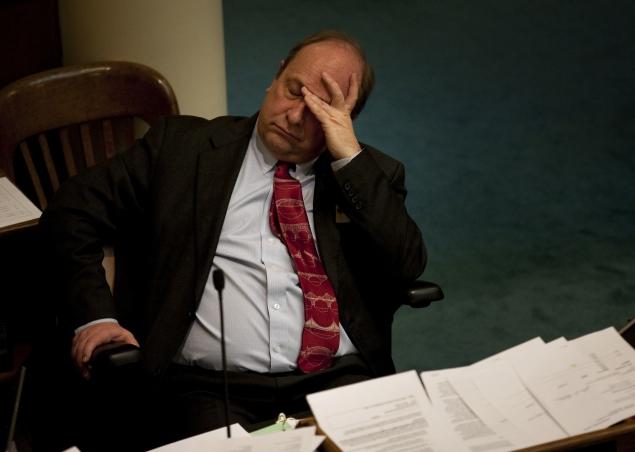 With lethal injection increasingly becoming a problem across the country, at least two states are considering bringing back firing squads to execute death row inmates.

This week in Wyoming Sen. Bruce Burns (R-Sheridan) introduced a bill, S.F.0049, to the state legislature that would authorize the use of a firing squad should the drugs required for lethal injection become unavailable in the future.

Increasingly lethal injection, often regarded as the most humane form of capital punishment, is being seen by some as anything but. Recently an Ohio man, Dennis McGuire,  lingered for 26 minutes after being injected.

The reason for his prolonged demise?  McGuire was given a two-drug cocktail, which included a sedative and a painkiller, both of which had never been used in an execution.

The reason these new drugs were used?  Traditional drugs have been hard to come by thanks to voluntary embargoes orchestrated by European pharmaceutical companies that object to having their drugs, e.g. pentobarbital, used to kill inmates.

Most Ohio death row inmates over the past 15 years took 15 minutes or less to die, records show. In years when Ohio used a three-drug combination, many inmates died in less than 10 minutes, according to the records.

With these executions causing more concern, some states are looking at old school ways to get the job done. 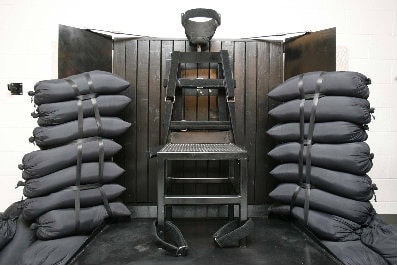 Utah has carried out 40 executions by firing squad, the last in 2010. (Photo credit: Times of London)

Burn’s Wyoming bill specifically allows a firing squad should supplies of current lethal injection drugs or new compounds prove inadequate. Currently the state mandates for a gas chamber, which does not exist, as a secondary means of execution. The choice in the new bill was a careful balance between the available options.

“One of the reasons I chose firing squad as opposed to any other form of execution is because frankly it’s one of the cheapest for the state,” Burns said. “The expense of building a gas chamber I think would be prohibitive when you consider how many people would be executed by it, and even the cost of gallows.”

“If I had my choice, I would take the firing squad over lethal injection,” Burns said.

In 2011, Florida considered establishing a gun row as an alternative to lethal injection, but that move failed.

In Missouri last week, state Rep. Rick Brattin introduced HB1470, a bill similar to that seen in Wyoming which would allow the use of firing squads in the state.

“A lot of folks may picture the 1850s and everyone lining up to shoot, but the reality is that people suffer with every type of death,” said Brattin, a Republican. “This is no less humane than lethal injection.”

Some see this differently, including Missourians for Alternatives to the Death Penalty who released a statement opposing the idea.

Calling the bill “an act of desperation to save a death penalty system that is completely broken and beyond repair…” they stated, “the idea of a firing squad is beyond the standard of decency for our modern society, and Missourians would be appalled at using such a barbaric method.”

The U.S. is one of several countries, including North Korea, Brazil and Indonesia, which still have firing squads listed as a capital punishment method. 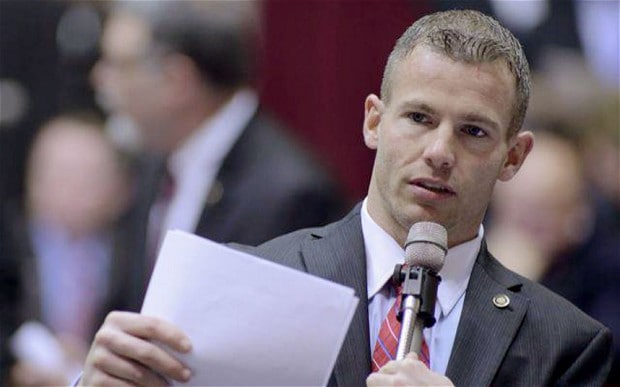 In the United States, except for military crimes during the Civil War era, execution by firing squad was never very popular.

Of the fifty states just four — Oklahoma, Nevada, Idaho, and Utah — have ever had the method on the books. Of these, By far, Utah has carried out the most executions by firing squad, with 41 condemned state inmates fatally gunned down.  However, just three of these have taken place since 1976.

Utah itself  banned the use of firing squads in 2004, but the practice was grandfathered for legacy death row inmates who asked for it.

The last execution by firing squad to take place in the United States was a Utah man, Ronnie Lee Gardner. Convicted of capital murder in 1985, Gardner specifically asked for execution by gunfire under the now-repudiated Mormon belief in ‘blood atonement’ by which individuals are required to shed their own blood to pay for their sins.

Garnder’s sentence was carried out on June 18, 2010, at fifteen minutes past midnight by a squad of five volunteer marksmen drawn from certified police officers. Concealed behind a solid wall with aiming slits over a bench rest, the marksmen, all armed with .30-30 Winchester lever action rifles, took aim at a white target placed over the condemned man’s heart.

To ease the stress and, perhaps, guilt of the marksman, one of the five rifles had a wax bullet cartridge loaded so that the shooters could not say for certain whether they fired a live round during the execution.

If Wyoming and Missouri approve these firing-squad bills, their respective state corrections facilities may have to stock up on wax bullets.